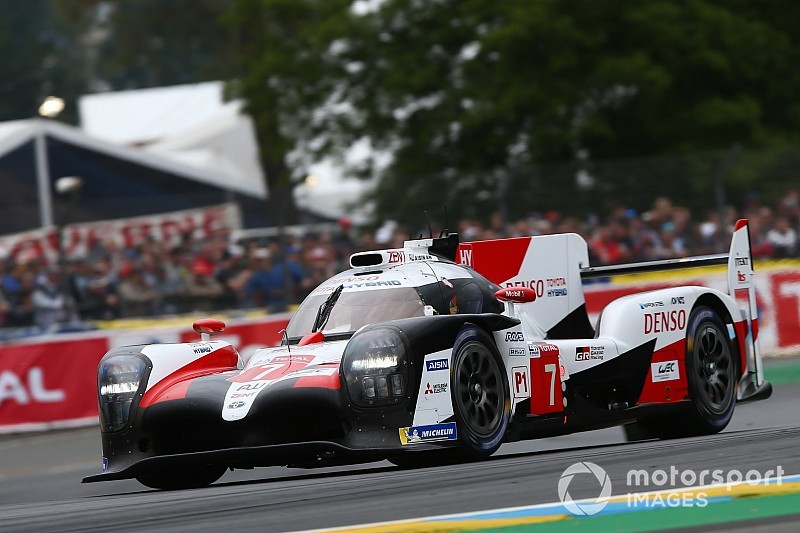 Toyota is heading for a second consecutive 1-2 finish at the Le Mans 24 Hours as Kamui Kobayashi leads his teammate Sebastien Buemi by some two minutes heading into the final four hours.

The gap between both Toyotas ebbed and flowed on an overcast morning at the Circuit de la Sarthe.

Mike Conway’s leading #7 TS050 Hybrid lost time when it had to make an extra emergency pitstop during a full-course yellow, but the leader's gap was such that Conway handed over the car to Kobayashi with a two-minute lead over Buemi in the #8 machine.

As daylight returned to Le Mans the leading LMP1 privateer, the #3 Rebellion R-13, lost its third place due to a three-minute stop-and-go penalty for a tyre violation. That dropped Gustavo Menezes behind the #11 SMP Racing BR Engineering BR1 of Stoffel Vandoorne.

Their duel proved short-lived as Menezes spun into the gravel at Porsche Curves, the #3 car’s challenge unravelling further with two visits to the garage.

The #1 sister car also hit trouble again to give the sole surviving SMP machine, now in the hands of Mikhail Aleshin, a free run at the bottom step of the podium, albeit five laps down.

The LMP2 battle took a dramatic swing when the leading #26 G-Drive Oreca disappeared into the pits for 20 minutes due to issues with the starter motor wiring.

G-Drive had led most of the night after duelling with the #36 Signatech Alpine, establishing an advantage of over two minutes.

Pierre Thiriet inherited the lead, which he passed onto Nicolas Lapierre before the 20-hour mark. Stephane Richelmi moved up to second in the #38 Jackie Chan DC Racing Oreca.

Earlier Richelmi's teammate Gabriel Aubry had suffered a scare when he appeared to run out of fuel, but the outfit kept its third place, which became second as G-Drive’s challenge fell apart.

The variety of issues that befell the leading cars gave TDS Racing’s #28 Oreca a fighting chance in third, while the #30 Duqueine Engineering Oreca continued its impressive comeback after hitting trouble in the first minutes of the race.

The #22 United Autosports Ligier comfortably established itself as the best non-Oreca outfit in fifth.

Just after 7h00 local time Pastor Maldonado had crashed out of third place in LMP2, making contact with the tyre wall at Tertre Rouge in the #31 DragonSpeed Oreca.

After Maldonado’s crash the top-three runners in GTE Pro were bunched up behind the same Safety Car train. The #63 Corvette of Antonio Garcia and the #51 AF Corse Ferrari of Alessandro Pier Guidi continued to trade the lead all morning as they found themselves on opposite ends of the fuel window.

With four hours to go, Pier Guidi handed over the #51 to Calado, who was 10 seconds adrift of Garcia.

The #91 Porsche was lying in third with Gianmaria Bruni going flat-out to hunt the two leaders down. Only a win would give Bruni and full-time teammate Richard Lietz the GTE world title.

The championship-leading #92 car of Michael Christensen and Kevin Estre is all but out of contention for points after a night-time exhaust issue put the car five laps down.

Corvette Racing managed to change the brakes of the #63 for the second time during a regular pitstop, hoping to gain an advantage in final four hours of the race.

All four of Ganassi’s Ford GTs completed the top eight, but none seemed to have the pace to threaten the front-runners. The leading #82 BMW M8 GTE followed in 10th, the only remaining Aston Martin Vantage GTE fell 16 laps down after Alex Lynn’s crash at night.

JMW Motorsport’s Ferrari 488 and Team Project 1 Porsche 911 RSR’s continued their battle for second place in GTE Am behind the dominant Keating Ford GT, which carried a three-minute lead into the final four hours with Felipe Fraga at the helm.

The Ferraris of Clearwater Racing and WeatherTech Racing squabbled over fourth in class.

Le Mans 24h: Drama as #7 Toyota loses lead with an hour to go