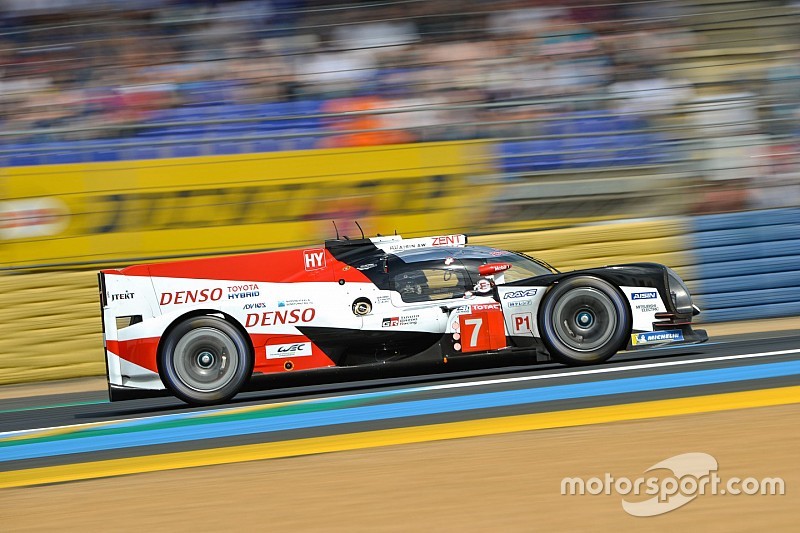 The gap between Toyota and its LMP1 rivals in the Le Mans 24 Hours will be much bigger than the times from the test day suggest, fear several leading privateers.

Rebellion managed to split the two Toyota TS050 Hybrids during the test, with the quicker of the Swiss team’s Oreca-built R-13s finishing only 0.614s off the pace set by Fernando Alonso in the #8 Toyota.

The gap between the lead Toyota and the #3 Rebellion roughly correspondents to the half-second per lap gap the Japanese marque was promised by the rulemakers this year.

But, Bruno Senna – who shares the #1 Rebellion with Neel Jani and Andre Lotterer – believes that the real gap will be much larger, with Toyota’s best lap of 3m19.066s a full five seconds slower than Kamui Kobayashi’s record-breaking pole effort from last year.

“The Toyotas are clearly faster,” Senna told Motorsport.com. “They didn’t do the same laptime they did last year yet, so clearly they are not showing everything they have.

“They are keeping their cards close to their chest, which is fair enough. For sure [the gap is larger than it was in the test].

“On the regulation side we have a few handicaps, so we’re struggling to be together with Toyota. But we’ll push them as hard as we can, see if we can make a race out of it.”

Former Le Mans pole lap record-holder Jani added: "We're approaching the limits of our car, only in the race week will we see the truth.

“I think Toyota will be a long way ahead of us. But we'll see what happens when we can keep them under pressure for a while."

ByKolles driver Oliver Webb concurred with the Rebellion duo’s assessment, saying that the Austrian squad’s “realistic” aim would be to finish third as the best non-hybrid car.

“If you look at their qualifying time last year to the test day, then yeah, you would guess so,” Webb told Motorsport.com when asked if he felt there was more to come from Toyota.

“Everyone else was quicker than they were last year in qualifying, whereas they were slower. And it’s not like the track was bad, so I think they do have some in reserve.

“The realistic dream would be third. To be top five is the minimum of what we want, and if everything goes perfectly, to fight for third."

SMP Racing’s Vitaly Petrov took a more optimistic view when asked what the Russian outfit’s aim at Le Mans would be, suggesting that beating Toyota is not impossible.

“I know it’s not easy to beat Toyota, but we have a chance definitely,” Petrov told Motorsport.com. “Anything can happen at Le Mans, it’s not a six-hour race.

“If we don’t do any mistakes and finish the race we will be very close to Toyota, or maybe in front. We know Toyota is quick, but we know our strong sides where we can beat them.

“Rebellion also looks very quick, but we are still learning the new car. We are fighting together with Rebellion and Toyota, but all the teams don’t push at the maximum.

“We just need to see, try to finish without any mistakes during the race, then I think we have chance to fight for good positions.”