Kamui Kobayashi set the fastest time in warm-up for the 2019 Le Mans 24 Hours aboard the #7 Toyota, a second ahead of the sister car. 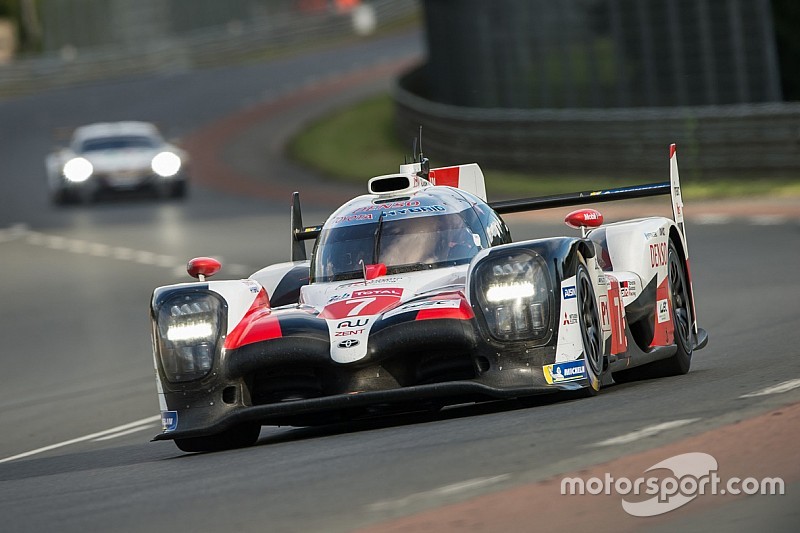 Kobayashi's lap of 3m19.647s was over four seconds slower than the #7 TS050 Hybrid's pole time as teams naturally took a conservative approach ahead of the race.

Thomas Laurent, who was confirmed as a Signatech Alpine LMP2 driver for the 2019/20 WEC season on Friday, placed the #3 Rebellion R-13 third.

Laurent had a slight off at one of the Mulsanne chicanes midway through the session before setting his best time of 3m21.868s, just over one second off the leading Toyota's best lap.

The #10 DragonSpeed BR1 was sixth ahead of the #1 Rebellion, with both cars setting their best laps in the final moments of the session.

ByKolles ended up slowest of the LMP1s and ninth overall after Tom Dillmann locked up under braking for the Dunlop Chicane, crossing the gravel and the run-off on the outside of the corner.

Vergne, who qualified fifth, managed a best time of 3m28.763s, 2.5s slower than his best time from Thursday night.

Porsches were fastest in both GTE classes, with Kevin Estre putting the works #92 car on top in the Pro division by a little more than a second.

Estre's fastest time, a 3m50.095s, was just over two seconds shy of the fastest GTE Pro qualifying time, and 1.001s off the time that put the #92 car seventh on the grid.

Harry Tincknell leapt the #67 Ford GT he shares with Andy Priaulx and Jonathan Bomarito up to second with a 3m51.133s lap with 10 minutes to go, and had been fastest of all through the first split on his next lap before a full-course yellow was issued.

Darren Turner put the class polesitting #95 Aston Martin Vantage GTE sixth, ahead of the lead BMW of Antonio Felix da Costa, who was 1.797s off the pace.