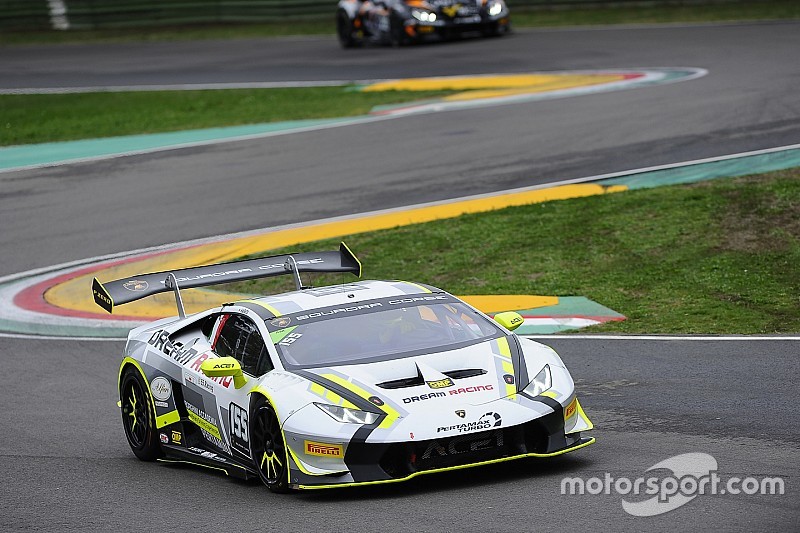 Yuki Harata set the pace in qualifying for the Am and Lamborghini Cup classes for race one of the Super Trofeo World Final at Imola.

Philipp Wlazik went second fastest, four tenths slower than Harata, moments later - with the battle for pole then put on hold by a three-minute full course yellow caused by Supachai Weeraborwongpong going off at Tamburello.

While nobody was able to challenge Harata’s time when the green flag returned with eight minutes to go, Super Trofeo Europe Am champion Teodor Myszkowski, sharing with Andrej Lewandwoski jumped to second with a lap 0.559s off Harata’s time.

But late on, Wlazik reclaimed second place with a time 0.462s off Harata to shuffle Myskowski down to third.

With the yellow flags flying late on thanks to Mario Cordoni’s trip into the gravel at Tamburello, late improvements were difficult and Harata did not better his time despite returning for a second run late on.

Perez looked to have secured class pole, and fourth overall, with his time set before the full course yellow.

But Hardwick, who was ahead of Cordoni’s off at Tamburello, crossed the line with 10 seconds remaining to take the position by four-tenths of a second.

Carrie Schreiner was the best of the Asia series regulars in eighth, ahead of Konopka and Andrew Haryanto.

Third-best of the Lamborghini Cup runners was Cameron Cassels in 16th place.