Trent Hindman and Jonathan Cecotto won a thrilling battle in the final round of the Lamborghini Super Trofeo North America series.

The win was in the balance until the very last corner of the race thanks to a time penalty awarded to on-the-road leaders Edoardo Piscopo and Taylor Proto.

The 30-lap race at the Lamborghini World Finals meeting at Vallelunga was the closest of the four held so far today.

From pole position Piscopo and Proto led the entire race on the road, but after they failed to meet the minimum pitstop time, they were struck with a 0.372 second time penalty that would be added at the end of the race.

Running within half a second of the lead Lamborghini Huracán was the Wayne Taylor Racing (no. 101) machine of Hindman and Cecotto.

Once the penalty had been issued, Hindman knew that he no longer had to pass Piscopo for the win, if he finished within 0.3s, he’d take victory once the penalty was applied.

All was going well for Hindman until the lead pair came across a backmarker, four laps from the flag. The slow-running Super Trofeo Asia series runner Takamichi Matsuda let the leader through but baulked Hindman entering Turn 4. That cost the American over a second and he was running out of time to gain back the margin he needed to win.

With two laps to go he was half a second behind Piscopo and closed on the final lap. At the very last corner the leading pair came across another backmarker which looked to have thwarted Hindman’s charge.

However, Hindman dived to the inside, Piscopo ran outside – splitting the lapped car – and in the charge to the flag, Hindman finished just 0.159 seconds in arrears. That was enough to give him and Cecotto a sensational victory.

Third place went to Corey Lewis and Madison Snow, despite them having to serve a drive-through penalty for ‘not respecting the starting procedure.’

In the final round of the Super Trofeo Asia series, which took place in the same race, Kei Cozzolino and Afiq Yazid took their second win of the day in the Clazzio Racing-run Huracán, three seconds ahead of Richard Muscat and Ben Gersekowski. They were over 13 seconds clear of the British duo of James Pull and Jack Bartholomew who took the final podium place.

Japanese racers Takeshi Matsumoto and Toshiyuki Ochiai took the Pro-Am class in the Asian round, while Damon Ockley was Pro-Am winner in the USA series. Brett Meredith won the USA Lamborghini Cup class. 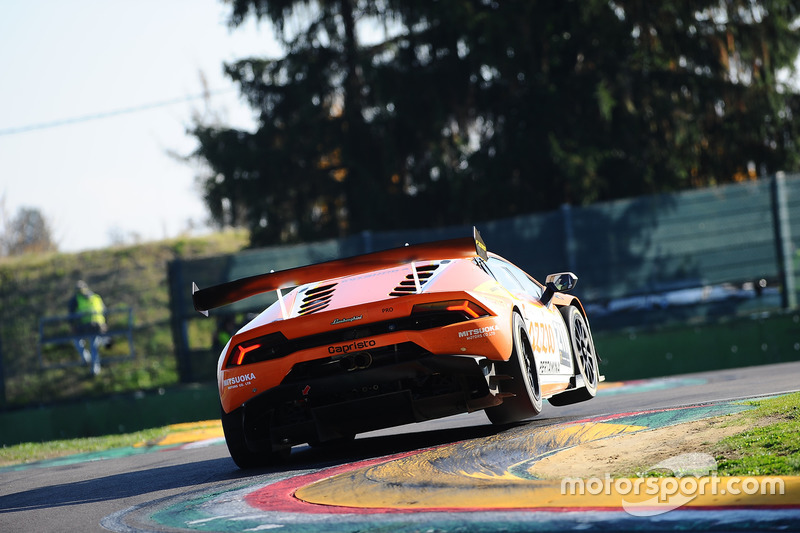