Qualifying for the Lamborghini World Finals began in Vallelunga Saturday morning, with two sessions for each of the final two races for the AM and Lamborghini Cup classes.

In the first of the two 20-minute periods, Dorr Motorsport’s Manuel Lauck was the pace-setter. His quickest time of 1m32.861s was 0.150s faster than Raffaele Giannoni’s lap.

The session had a brief pause for a red flag and with three minutes remaining Lauck attempted to go quicker, but just fell short on his final two runs.

Third-quickest was Dream Racing’s, Ryan Hardwick who was marginally ahead of Konrad Motorsport’s Christopher Bruck.

The two US Race Tronics Huracans were next up with Damon Ockey just 0.019s ahead of his teammate Brian Thienes. Shea Holbrook, Davide Roda, Nicolas Gomar and Glauco Solieri rounded out the top 10.

In the first session for the Lamborghini Cup, P1 Motorsport’s Brett Meredith was clear of the opposition, setting a 1m 33.951s lap, 0.406s ahead of Dream Racing’s Justin Price. Third in the LC class was YH Racing’s Takamichi Matsuda.

After a brief pause, the second session for the AM and LC race was held to form the grid for the race that takes place at Vallelunga tomorrow.

It was the US Race Tronics machine of Ockey that set the quickest time of 1m 32.907s, faster than Hardwick’s Dream Racing-run Huracan by +0.254s. Giannoni put in another strong run to set the third fastest time ahead of Roda and Florian Scholze.

After qualifying 10th for race one, Solieri improved his grid position for race two with the sixth-quickest time, fractionally ahead of Cameron Cassels.

It was also very tight in the timings for the Lamborghini Cup class, the pace-setter for race two was Daijiro Yoshihara who set a 1m 33.878s lap, just +0.006s quicker than Meredith, with Price in third place. 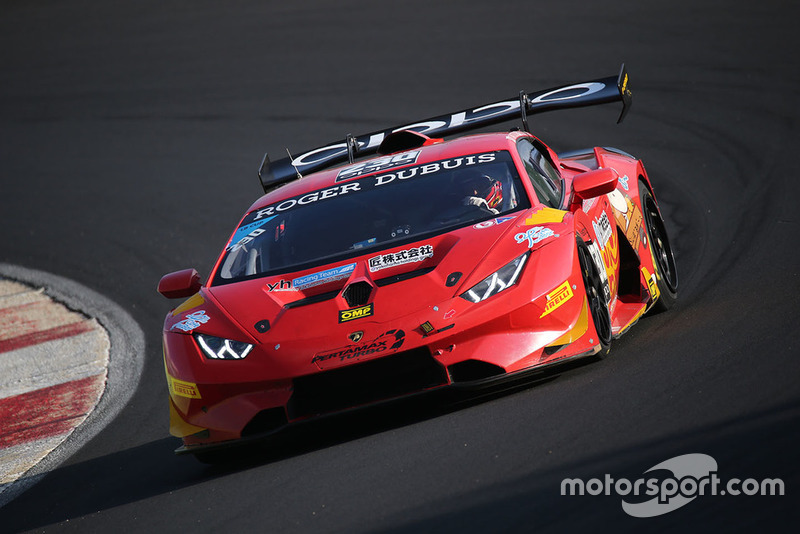