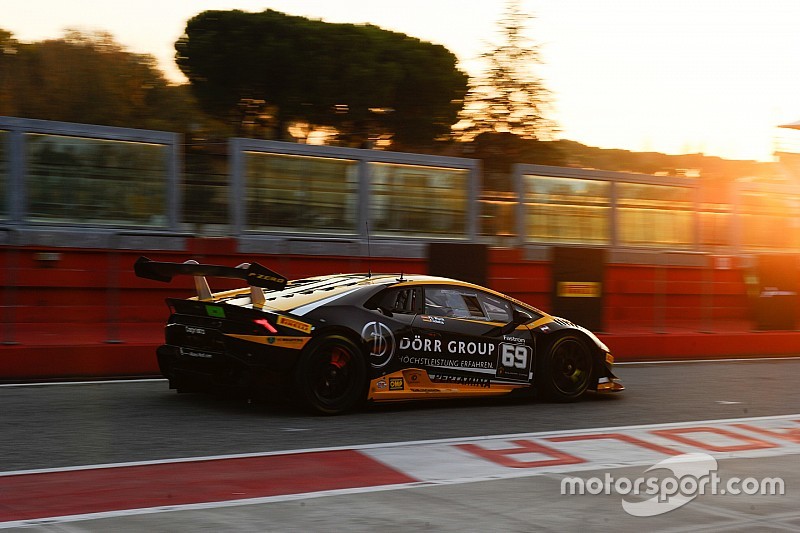 Wlazik made a good start and looked threatening alongside pole-sitter Yuki Harata on the run to Tamburello before slotting into second place ahead of Teodor Myszkowski.

The leading trio only managed half a lap before the safety car was deployed because of an accident at Tamburello involving Miroslav Konopka, William van Deyzen, Cameron Cassels, Ross Chouest and Mariusz Urbanski.

The race got back under way with 36 minutes of the original 50 remaining, with Harata holding the lead - only for the safety car to be sent out again after just one lap of racing.

This time it was because Jaap Bartels was stopped on the grass on the inside of the Tosa left-hander, neutralising the race until it restarted with 27 minutes to go.

Harata again held the lead at the restart and set about trying to pull an advantage of more than three seconds, because as a solo driver his minimum pitstop time was three seconds longer than for those sharing a car behind him.

He pitted at the end of lap 14 with a 2.1s lead, re-emerging running in third behind Lewandowski, who had taken over from Myszkowski as soon as the pit window had opened.

Wlazik pitted a lap later, with teammate Florian Scholze emerging in the lead. But Lewandowski and Harata blasted past him as he got back up to speed on the run to Tamburello.

With Scholze dropping back, Harata dived up the inside of Lewandowski into Tosa on lap 17, tipping the leader into a spin and out of the race.

Harata kept going, only to suffer a front-right puncture two laps later under the third safety car of the race - a possible legacy of the clash.

This gave Scholze the lead, but the final safety car, deployed because of Lamborghini Cup leaders JC Perez and Ryan Hardwick clashing at Tamburello, set up a six-minute dash to the flag.

Carrie Schreiner, driving solo, pressured Scholze at the restart and looked set to make a move, but was passed by Matej Konopka for second into Tamburello on lap 21.

Later that lap, Schreiner was hit by Dilantha Malagamuwa into Tosa, putting both out of contention. Malagamuwa did continue, but later clashed with Cyril Leimer.

Scholze held off Konopka to take the chequered flag half-a-second ahead.

Third place went to solo driver Mario Cordoni, who started 19th but capitalised on problems ahead to pick up the final podium position ahead of the lead Asia series entry of Andrew Haryanto.

Gerard van der Horst won the Lamborghini Cup in ninth place, although Perez and Hardwick had been well ahead when they clashed.

Van der Horst picked up the lead when Supachai Weeraborwornpong went off shortly after the final restart, and came home one second ahead of class rival and 10th-placed finisher Oliver Engelhardt.