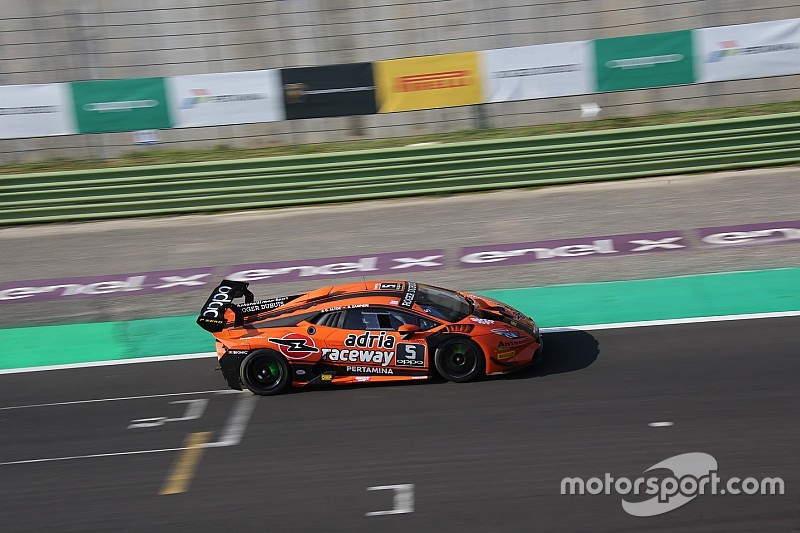 Daniel Zampieri and Giacomo Altoe triumphed in the Super Trofeo Europe Pro & Pro-Am race, the third of six races taking place at the Vallelunga circuit, north of Rome, on Friday.

Despite just 0.7 seconds separating them at the flag it was Shaitar and Timur Boguslavskiy who took the final place on the rostrum.

In the Pro-Am class, victory went to the Iron Lynx pairing of Lorenzo Bontempelli and Emanuele Zonzini. Despite finishing behind the P1 Motorsport duo of Loris Spinelli and JC Perez on the road, the latter were given a five-second time penalty for contact on the opening lap.

The five second penalty to the Super Trofeo Europe Pro-Am leaders was the second forfeit the stewards handed out after opening lap drama.

British driver James Pull was attempting to take second place from the fast-starting Vito Postiglione and as he tried to go around the outside at the first hairpin at Turn 5, the pair made slight contact and Pull spun into the gravel.

The Safety Car was deployed to clear up Pull's stricken Race 2 Huracán. While contact further around the lap between Postiglione and Loris Spinelli, forced Postiglione down to fifth place. The stewards determined Spinelli was at fault and awarded him a five second time penalty, which ultimately cost him the race.

But that was scant consolation for Postiglione, who was given a drive-through penalty for his actions in the incident that caused Pull to retire. He finally finished ninth, sharing with Karol Basz.

Third place in the Pro-Am class went to the second Iron Lynx car of Francesca Linossi and Stefano Colombo, they finished ahead of the VS Racing duo of Takashi Kasai and August MacBeth.