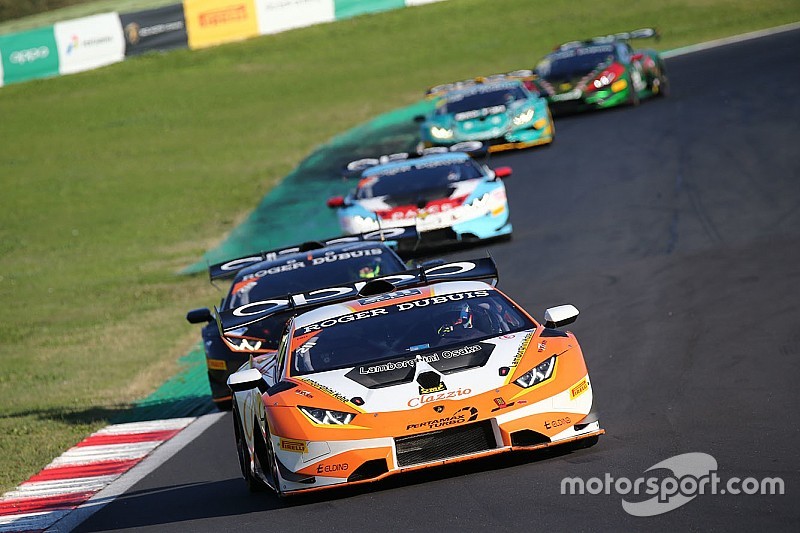 Clazzio Racing’s Kei Cozzolino and Afiq Yazid inherited victory in a chaotic race in the Super Trofeo Pro class at the Lamborghini World Finals on Saturday afternoon. They pair took the win at the Italian circuit of Vallelunga after their nearest rivals were struck with penalties.

Antonelli Motorsport’s Giacomo Altoe and Daniel Zampieri were leading comfortably when they were struck with a drive-through penalty for an infraction in the pitstop sequence. Zampieri served his penalty and fell to fifth, but he still had a chance of making the podium when the second-placed car of Kelvin Snoeks and James Pull was also ordered to serve a drive-through.

But Zampieri was in trouble with race control once more when he passed a car under yellow flags and had 20 seconds added to his race time after the chequered flag. From leading, Zampieri and Altoe finished tenth and last in class (of those still running).

It wasn’t entirely straight forward for Snoeks either. The second-placed car failed to enter the pits for his drive-through penalty and was finally disqualified by race control.

The fight was second place in the Pro class ended up being a closely-fought affair between the Leipert Motorsport cars of Ben Gersekowski (and Richard Muscat) and Niels Lagrange (sharing with Frederik Schandorff). The pair crossed the line separated by less than eight tenths of a second.

They finished five seconds clear of American Madison Snow and Corey Lewis and the Huracan of Victory Shaitar and Timur Bouguslavskiy.

Second place – and potentially the race win – could have gone to Andrzej Lewandowski, but he unfortunately crashed out of the race in his VS Racing Huracan (shared with Edoardo Liberati) on lap 20.

Other Pro runners who hit trouble in the race included Taylor Proto who suffered a puncture following a high-speed series of spins in Turn 3. After running wide over the gravel, he came back onto the track and completed three complete 360 degree rotations before being forced to retire.

The Safety Car also made an early appearance after first lap contact involving the Antonelli machine of Kikko Galbiati and Joffrey De Narda which needed recovering from the side of the circuit.

The Super Troefo Pro-Am class was a less chaotic event with P1 Motorsports JC Perez and Loris Spinelli a clear margin ahead of the Iron Lynx Huracan of Lorenzo Bontempelli and Emanuele Zonzini.

The battle for third was very tight with just six tenths covering the final place. That went to the Finnish pairing of Mikko Eskelinen and Juuso Puhakka.

The last two races in the Lamborghini World Finals take place at the Vallelunga circuit on Sunday.