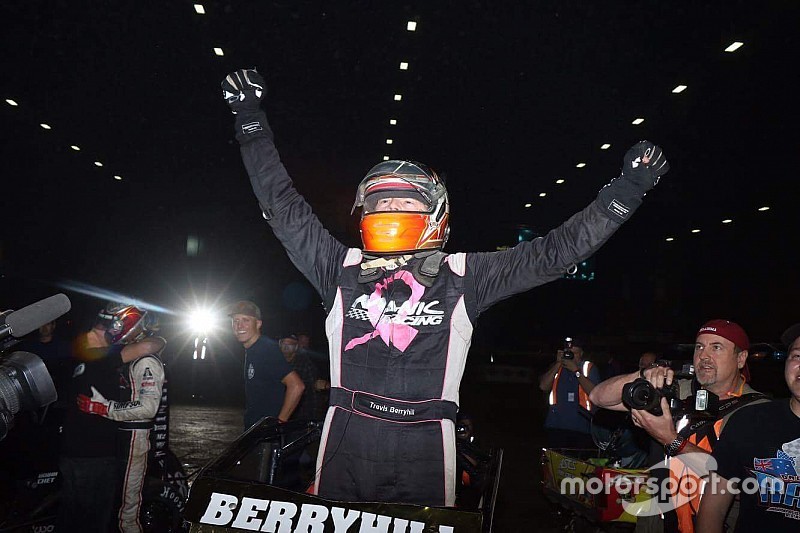 Even Travis Berryhill referred to his victory in Wednesday night’s Chili Bowl qualifier as “the biggest upset ever”.

Berryhill, who has raced in the event since the early 2000’s, has qualified for Saturday’s B Main in the past but never had the luxury of advancing to the A Main in the Mecca of Midgets.

The 33-year-old American Canyon, Cal. native said his car felt fast off the truck. He won the third heat race at Tulsa Expo Raceway then started fifth in the feature. Four laps into the race Berryhill was in command and held onto to the finish.

“We just beat a bunch of beautiful, high dollar race cars and it feels good,” Berryhill said. “I’ve been coming here a long time. We’ve had good runs — we’ve had a lot of bad runs. You just have to keep digging and we put it all together.”

Jake Swanson transferred from the B Feature 2 to finish second, followed by Colby Copeland, Gary Taylor and Tyler Thomas.

“All I wanted to do was stick this thing in the show on Saturday, and we did it.” Swanson said. “Not bad for an old sprint car driver. I’m stoked. I don’t have to run in the feature tomorrow.”

Five-time Chili Bowl winner Sammy Swindell finished fourth in the B Feature 2 to transfer to the A and settled for seventh. Current World of Outlaws champion Donny Schatz finished eighth in the qualifier.

Berryhill, who works during the week as an CNC machinist during the week for Don Schumacher’s NHRA — and worked for Michael Andretti prior to that — won just 10 midget prior to Wednesday’s victory.

“It’s a long road for me, you don’t think it’s ever going to pay off,” Berryhill said. “But you keep digging. Tonight it paid off and it was cool. Sometimes you get some Chili Bowl luck and we had that today.”