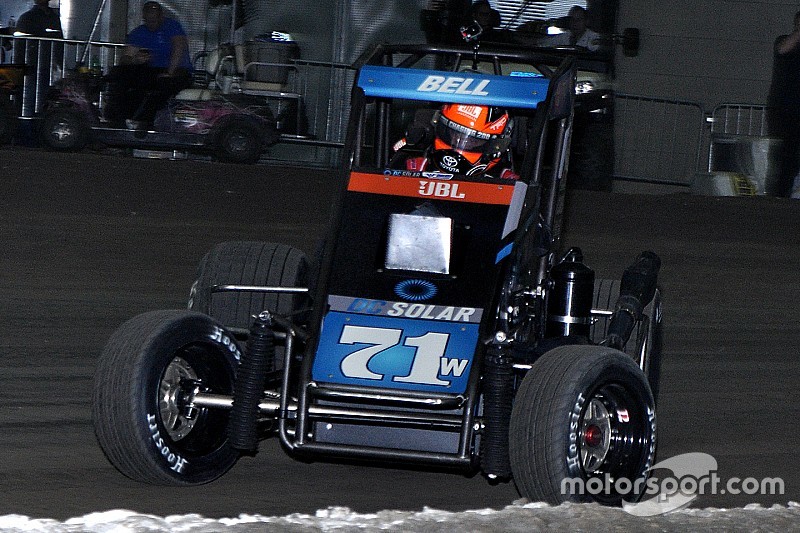 Bell, who was born in Norman, Okla. 11 months following Andy Hillenburg’s 1994 win, can only rely on videos to provide perspective.

But on Saturday, Bell remedied that drought. He brought the Golden Driller trophy home to Oklahoma — if only for a night.

“It’s just unbelievable,” Bell said. “I watched a lot of Chili Bowl film last week just because I was really excited and I really love this race. I watched the 1994 Chili Bowl where Hillenberg won it — and then watched just about every one in between that. And no other Oklahoma guy had ever done it. To be able to do it is awesome.”

Bell's victory was the third-straight for for Keith Kunz Motorsports and Toyota Racing Development. KKM was also Hillenberg’s team owner in 1994.

Bell’s family brought him to Tulsa Expo Raceway before he started grade school. He transitioned from spectator to competitor in 2011. By 2014, Bell made it to the A-Main and finished third.

Between last year’s defeat — after winning the pole for the feature and leading the first nine laps before spinning out to draw the first caution — and a full year in the Camping World Truck Series where he finished third in the standings, Bell knew that patience would be key to persevere in the Mecca of midgets.

“In years past, it’s been attack, attack, attack,” Bell said. “This year, it didn’t have to be that way. I just ran hard enough to stay in position but not get into trouble. I was able to ride behind Justin there for a while. I knew the bottom was slowing down quite a bit and I kept trying the top. I tried it two times and I almost got passed, so I knew it was going to be a matter of too early or too late at the top.

“I started to watch the big screen. Pittman was running the top at the time. I knew he was in eighth and I looked up and he was third or fourth so I knew I had to go. Once I went, I was able to squeak by Justin on the straightaway and then it was a matter of just not screwing up.”

Pittman, who was in the stands as a kid when Hillenberg won in 1994, came from eighth and moved up to third behind Bell after the third caution. The race restarted on Lap 18 with Grant and Bell running first and second. Eight laps later, Bell made his move with Pittman in tow.

The race was slowed by three additional cautions. Pittman, who had engine issues earlier, caught Bell with eight laps remaining in the race but lost a cylindar in the closing laps and settled for second.

For the Owasso, Oklahoman, it was his career-best finish. Pittman’s previous best result was sixth in 2015.

“It’s hard to be disappointed with second with 375 cars that were here,” Pittman said. “They knew we were here. I felt like I kept trying to keep them honest. We were good. We had a really good race car. I could keep pace with him, even catch him a little bit, I just didn’t know how to pull of the move.

“The track got a little tricky. It was follow the leader on the bottom, then it got tough around the top. But man, I love this race. It’s my favorite race of the year. I look forward to it every year. Congrats to Christopher. If I couldn’t win, I’m proud that another Oklahoman got the win and made it an Oklahoma 1-2.”

Shane Golobic led the 21-car field in the first B-Main. He went wire-to-wire to transfer to his fifth A-Main appearance. The first of four cautions occurred 10 laps in when Chad Boat stopped on the backstretch. Five laps later, Paul McMahan flipped in Turns 1 and 2. On Lap 18, Ryan Robinson stalled on the track and collected D.J. Net. A four-car pile-up triggered the final caution with two laps remaining, but Geologic held off Jerry Coons Jr., and Gary Taylor for the win. Jonathan Beason, Thomas Meseraull and Michael Faccinto advanced.

Jac Haudenschild started third in the first C-Main. After an early caution involving Tanner Berryhill and Colten Cottle, Haudenschild drove his No. 73x midget passed polesitter Ryan Smith to take the lead on Lap 6. Although the 15-lap race was slowed by four cautions, Haudenschild held on for the win. Paul McMahan finished second. Thomas Meseraull, who won the D-Feature finished third to transfer along with Smith, Chad Boat and Aaron Reutzel.

Although Kyle Larson, who started from the D-Feature, stalled in the event and finished eighth. Justin Allgaier, who destroyed his car on the final lap of Thursday’s qualifier, finished 18th.

Cory Kruseman led the second C Feature to the green but Tanner Thorson came from fifth to take the point on Lap 6. Thorson led the final nine laps and was slowed by just one caution on the way to transferring to the B-Feature. Cory Kruseman, Michael Pickens, Spencer Bayston, Dylan Westbrook and David Gravel moved on.

Holly Shelton, who became the fifth woman to qualify for the C-Main, finished 15th.