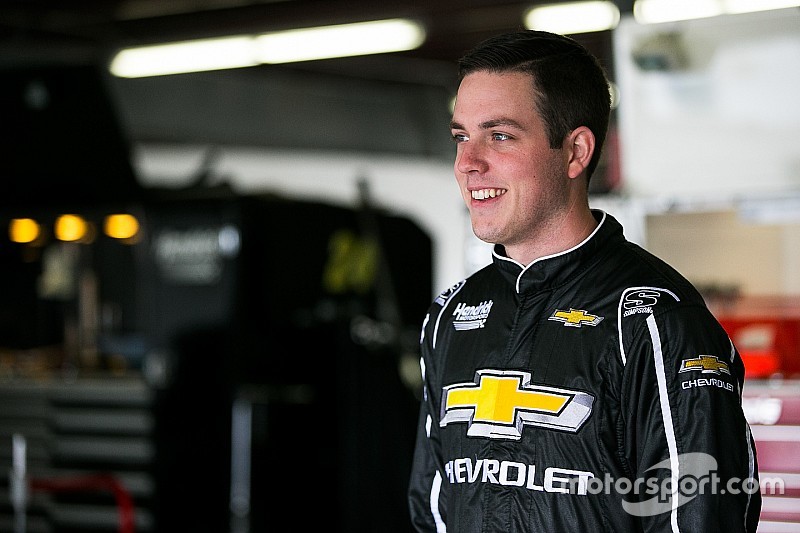 Alex Bowman couldn’t keep his hands off of the No. 55x Valvoline midget race car in the hours leading up to his team’s qualifying night for the Chili Bowl Nationals.

The driver-turned-car-owner spent his off-season from NASCAR working on the car in his spare time before returning to the Tulsa Expo Raceway with C.J. Leary behind the wheel.

Bowman is beyond grateful for the opportunity to drive the No. 88 Hendrick Motorsports Chevrolet in the Monster Energy NASCAR Cup Series, but there’s still a part of him that yearns to return to his racing roots. Although he would love to be driving in the Mecca of Midgets, for now, he’s happy to be able to pay it forward.

“I love this stuff,” Bowman said. “It’s only one race a year, but it’s cool to be able to give back a little bit and give C.J. an opportunity in what I feel is a great car. We have a piece capable of winning.

“To give a guy an opportunity and have as much fun as we have—it’s all my buddies from Arizona and the guys we used to race around. They come out and help. It’s a heck of a good time, the most fun week of the year.”

Returning to his roots

Bowman grew up racing midgets. He won 11 races en route to the 2008 USAC National Focus Midget championship. The following year, Bowman earned USAC National Midget Rookie honors. But when he fractured his clavicle and a rib in a 2010 wreck, his parents suggested he move to stock car racing.

The Tucson native was 18 when he first entered the NASCAR K&N Pro Series East and ARCA ranks. Bowman quickly advanced through the NASCAR Xfinity Series and up to Cup. But Bowman wasn’t able to showcase his talent with the caliber of teams he raced for.

“My career path had a lot of ups and downs,” Bowman said. “Obviously, there were times I thought I was done and wasn’t going to be able to keep racing. I didn’t know where things were going to end up. But it’s such a dream come true to end up at Hendrick Motorsports. I never in a million years—after what happened in the last five years—thought that would ever happen.”

With the current economic climate and drivers having to pay to compete, Bowman understands what it means to get a break. After Valvoline offered to sponsor Bowman’s entry, the sponsor gave him carte blanche with driver selection. Leary, 21, seemed a logical choice.

A Greenfield, Indiana, native, Leary started racing on dirt at 10. He graduated to USAC Sprints and Silver Crown cars in 2014. He finished seventh in the Amsoil National Sprint and 12th in the Silver Crown standings last year.

“I think a lot of it had to do with my last two appearances here,” Leary said. “I also had a breakout sprint-car year last year, winning five USAC National races. It’s just really cool to work with someone with the drive and heart for racing that Alex has. He’s here getting his hands dirty and trying to get it running 100 percent.

“It’s cool for him for to be a car owner. I really think he’d rather be driving but maybe next year.”

Leary won his third heat race on Thursday, finished second to Christopher Bell in his qualifier and was running second to Bell in the A-main preliminary before spinning out and finishing 18th.

“I gave them a list of people I could have drive the car,” Bowman said of Valvoline. “They were like, whoever you think is good, we’re good with it. It’s cool that they let me make who I thought was the best choice. Hopefully, we’ll be good in qualifying and again on Saturday.”

When Bowman needed the final touches on his midget, he enlisted the help of the Hendrick Motorsports fab shop. While North Carolina might be the heart of NASCAR country, it’s not a hotbed for building midgets.

“We built the body there and cut a couple of bars out,” Bowman said. “I’m very thankful for all their help. I couldn’t have done it without them. It was nice. I’ve worked on these cars all my life but I’m not a fabricator. I’m a race car driver. I can build one, but it’s not going to be as nice as if a guy who is a fabricator for a living builds one. That help was a big help for me.”

When Monday rolls around, Bowman will have to return to his day job. For the last two years, he’s spent more time in the simulator and testing the wheel-force car for Chevrolet. Bowman said the experience has kept him sharp.

“We unloaded at Charlotte fast right off the bat,” Bowman said. “We unloaded at Phoenix fast. So I didn’t have to re-acclimate to driving a race car versus a simulator. I was still driving a real race car, just testing.

“And I wasn’t. Restarts were probably the best thing for me, but I was rusty on pit road and out of the pit box. It showed me what I needed to work on. But last year, it kept me sharp and kept the speed there which is really important.”

Another perk of Bowman’s role as test driver was the ability to develop a relationship with Alba Colon, the former Chevrolet Racing NASCAR Program Director, who was named director of competition systems for Hendrick Motorsports earlier this week.

“Alba is one of my favorite people in the garage and always has been ever since I met her,” Bowman said. “She’s so helpful. She’s been huge in helping me. She was huge in the wheel force program and supporting me in getting that role and the role in driving the simulator. She’s one of the key people in my career. I probably wouldn’t have gotten this far without her.

“I’m excited to have her on the team. She’s so smart, so good with people. I think she’ll bring a lot to the table. To have somebody that everyone loves working there is always going to be a positive.”

With the depth of resources at Hendrick Motorsports, Bowman knows that 2018 represents his best shot at showcasing his talent in stock cars. He knows he can rely on the support of his teammates to use as a sounding board throughout the season.

“So thankful for that and to get to work with the 88 team and have Nationwide and Axalta on board,” Bowman said. “It’s going to be so much fun. It’s going to be cool to be able to lean on everybody there.

“I have Jimmie Johnson, Chase Elliott and William Byron to lean on but at the same time I can lean on Dale (Earnhardt Jr.) and Jeff Gordon. There’s just such a depth of knowledge. I feel like any time I’m around those guys I get to learn. I’m just trying to be a sponge, learn what I can and hopefully, come February, start winning some races and have a bunch more fun.”

With three winless racers under the Hendrick Motorsports roof, who gets to Victory Lane first?

“Hopefully, me,” Bowman said. “I’ll take it. There’s a lot of circumstantial stuff. Obviously, we’ve been extremely close to winning a Cup race and didn’t have it fall our way. Chase has had it multiple times and hasn’t had one fall his way.

“Then I sit out of a car for seven months, then go to Charlotte and out of all the Xfinity races that I’ve run, it wasn’t my best race by any means but the car got really good at the end, the race played out for us and we won. A lot of it is circumstantial, and we just have to have things go our way.”

Chili Bowl: Bell locked into Saturday's A-Main and "having a blast"