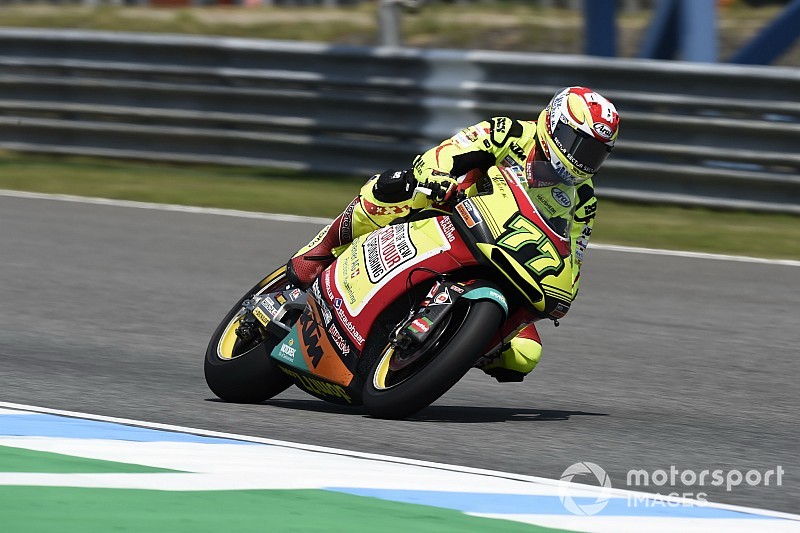 Long-time Moto2 racer Dominique Aegerter has admitted that the current season is likely to be his last in grand prix racing's middle category.

Aegerter, 28, has been a permanent fixture in Moto2 since the category's inaugural season in 2010, and has a single grand prix win to his name from the Sachsenring race in 2014.

The Swiss veteran also won last year's Misano round, only to be excluded for a technical infringement.

However, the 2018 season has been a difficult one for Aegerter, following a winter of upheaval for his Kiefer Racing squad after the tragic passing of team co-founder Stefan Kiefer last October.

He lies 18th in the standings, with just two top-10 finishes to his name, having missed two early-season races to injury.

"Unfortunately, it looks bad for my future," Aegerter told Swiss broadcaster SRF. "Last week I had to deal with the fact that I probably will not be in the paddock next year, and that there is no room for me in Moto2.

"There are still a few places that are free, here at Kiefer and at Forward/MV Agusta, but it looks very bad."

Aegerter revealed he had the chance to join RW Racing for 2019, but only if he brought a budget. He refused, and the team has since signed Bo Bendsneyder to partner incumbent Steven Odendaal.

"Of course you can say why I did not sign up for NTS [the chassis used by RW], but it's related to the material, and of course that's also a question of money," added Aegerter.

"If this had been the last resort in recent weeks, I think we would have accepted that. But you have to set up the budget first. We did not have that at the time."

With little chance of staying in Moto2, Aegerter said his focus for 2019 will be on securing a seat in either World Superbike or its support category World Supersport - adding the all-new MotoE category does not interest him.