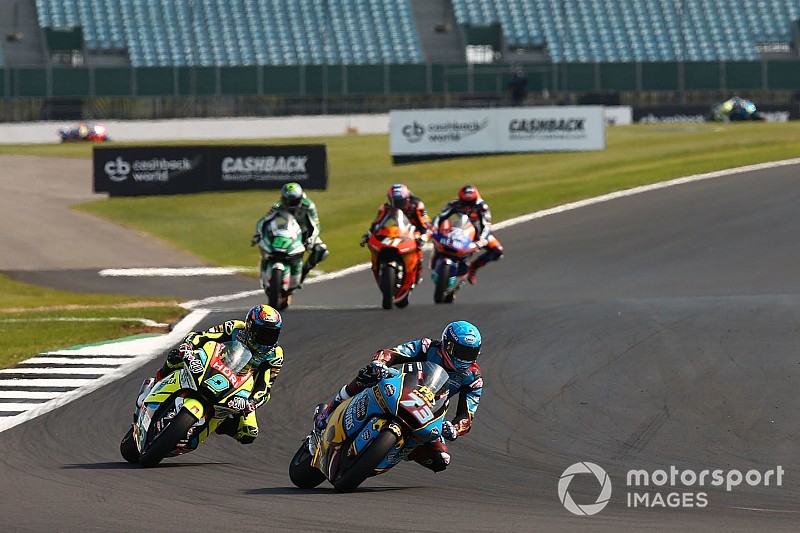 Alex Marquez has pledged to learn a "lesson" from his crash in last weekend's Silverstone Moto2 round, which he admits was a result of overconfidence.

Marc VDS rider Marquez led the opening laps of the race as he chased a sixth win of the season, and was locked in a battle with Speed Up's Jorge Navarro at the head of the field.

But on the sixth lap of 18, Marquez suffered a low-side heading into Brooklands, marking his third non-score of the year and ending a streak of three podium finishes.

Pons rider Augusto Fernandez went on to win the race, drawing level with Tom Luthi and Navarro in the standings, and as a result Marquez's advantage in the championship has been cut to 35 points with seven rounds left of the season.

"First of all, I apologise to the team because it was totally my mistake, just by [being] stubborn," Marquez told Spanish broadcaster DAZN.

"I wanted to enter the corner when I was going a bit long, I wanted to stop the bike to waste as little time as possible.

"It's a lesson not only for me, but for everyone, to not be overconfident and keep your feet on the ground, to see that this [season] is very long, that there are still a lot of races left, and that an error can happen at any time."

Despite being linked to a possible MotoGP graduation in 2020, Marquez recently signed a new deal to remain at the Marc VDS squad in 2020.

He is set to be partnered at the Belgian squad next year by Sam Lowes, with current teammate Xavi Vierge moving across to join the Petronas Sprinta team.