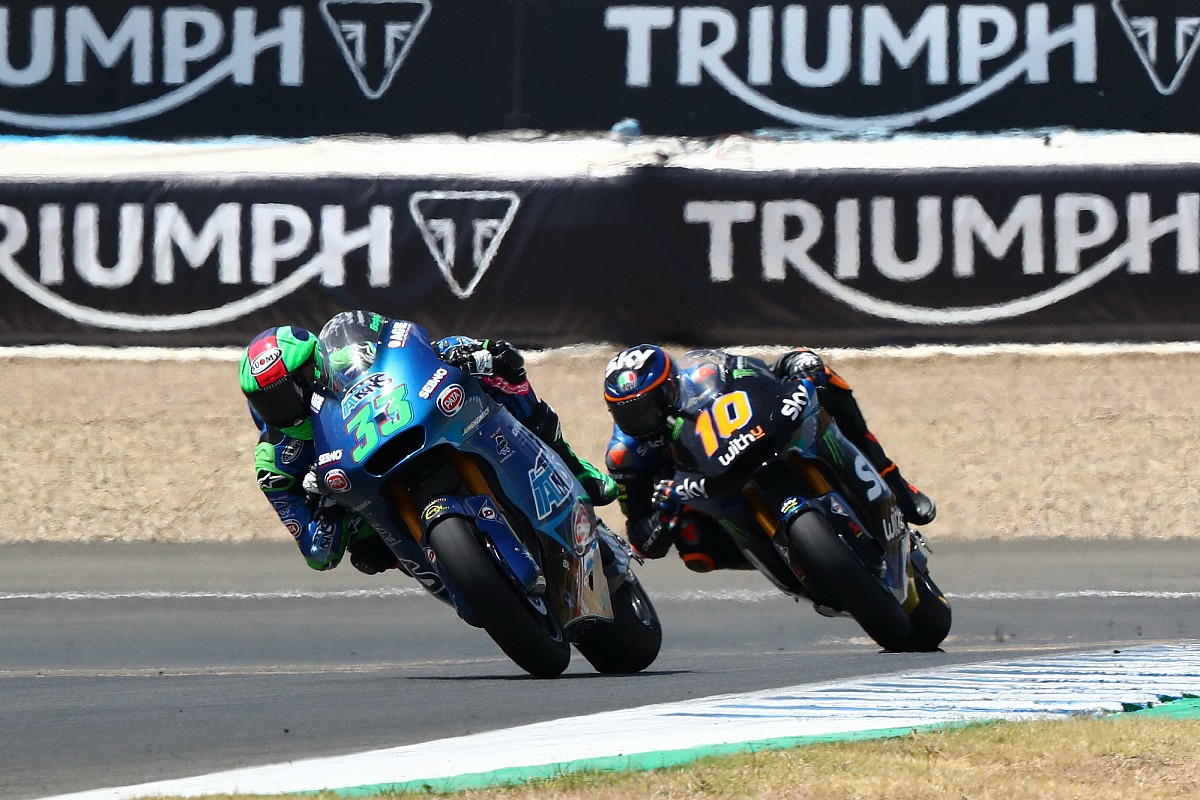 Enea Bastianini dominated the Moto2 Andalusian Grand Prix to claim his first win in the class, while a hobbled Tetsuta Nagashima recovered to 11th to hold his championship lead.

First-time Moto2 poleman Marco Bezzecchi nailed the launch off the line and held the lead at Turn 1 ahead of Bastianini and last week’s Jerez race winner Luca Marini.

Italtrans rider Bastianini quickly dispatched the VR46 Kalex of Bezzecchi and immediately opened up an advantage of half a second at the front.

Marini quickly surmounted his VR46 teammate Bezzecchi, who began to fall into the clutches of Sam Lowes on the Marc VDS Kalex as the top two opened up a buffer.

By lap five, Bastianini’s advantage stood at around seven tenths, though Marini would cut this down to half a second two tours later.

A mistake for Bastianini at Turn 8 on lap 11 gave Marini a sniff, but the Italtrans rider defended his line well and kept himself in check over the next few tours as Marini hounded him.

Bastianini would start to edge away again on lap 14, re-establishing his lead at six tenths and continued to put more daylight between himself and Marini.

With five laps to go, Bastianini had pulled the pin and his lead over Marini opened out to 1.8s, with that gap extending to over two seconds over the final few tours.

Keeping it clean across the last laps, Bastianini eased to his first grand prix victory since the 2018 Moto3 Catalan GP and has announced himself as a championship contender.

Marini crossed the line in second, while teammate Bezzecchi fended off a late charge from Lowes to secure his first Moto2 podium. It marks the first time there has been an all-Italian podium in the intermediate class since Imola in 1998.

However, while both VR46 riders celebrated with each other after the chequered flag, they both had an embarrassing collision at between Turns 1 and 2. Both were unharmed.

Aron Canet got his Aspar-run Speed Up bike to fifth ahead of KTM Ajo’s Jorge Martin, while Tom Luthi was seventh on the Intact GP Kalex.

Xavi Vierge was eighth on the Petronas Sprinta machine ahead of MV Agusta’s Stefano Manzi and the second Intact bike of Marcel Schrotter, who mugged Nagashima at the final corner when the Japanese rider ran wide.

Nagashima took a heavy knock in a crash in FP3 on Saturday and could only qualify 15th, but maintains a slender championship lead of two points over Bastianini, while Marini is now only five behind the Japanese rider.