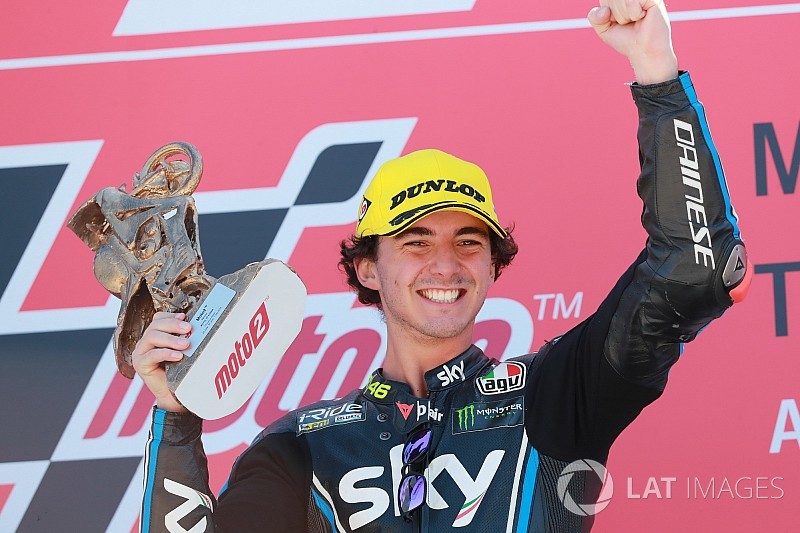 Bagnaia led from pole position and immediately began to build a gap to the chasing field, working up a 2.5s advantage over Pons racer Lorenzo Baldassarri who came up from 13th on the grid.

Baldassarri had just started nibbling into Bagnaia’s lead, bringing it down to 1.5s, when he picked up a rear puncture and was forced to pit.

That promoted Catalan winner Fabio Quartararo (Speed Up) to second from 10th on the grid, after he'd picked up a three-place grid penalty for not immediately entering the pit lane during a red flag period in qualifying.

Intact GP’s Marcel Schrotter held that second spot in the early stages from the front row of the grid, but he let Marc VDS rider Alex Marquez through when he went deep into the Timmer chicane.

In the closing stages Quartararo was charging through the field, coming through with a series of aggressive moves culminating in a pass on Marquez at Turn 4 for second.

Marquez completed the podium ahead of Schrotter, with reigning Moto3 champion Joan Mir fifth from ninth on the grid.

Red Bull KTM Ajo’s Miguel Oliviera was sixth from 17th on the grid to sit 16 points adrift of Bagnaia in the championship.

His KTM teammate Brad Binder was seventh ahead of Sky Racing’s Luca Marini, who had scored his first front row start in Grand Prix racing.

Speed Up racer Danny Kent retired from the race after a crash at the start of the race.

SIC Racing Team rider Niki Tuuli did not start the race after a heavy crash in qualifying, which required surgery on his left hand.

Binder to continue with Ajo KTM for 2019