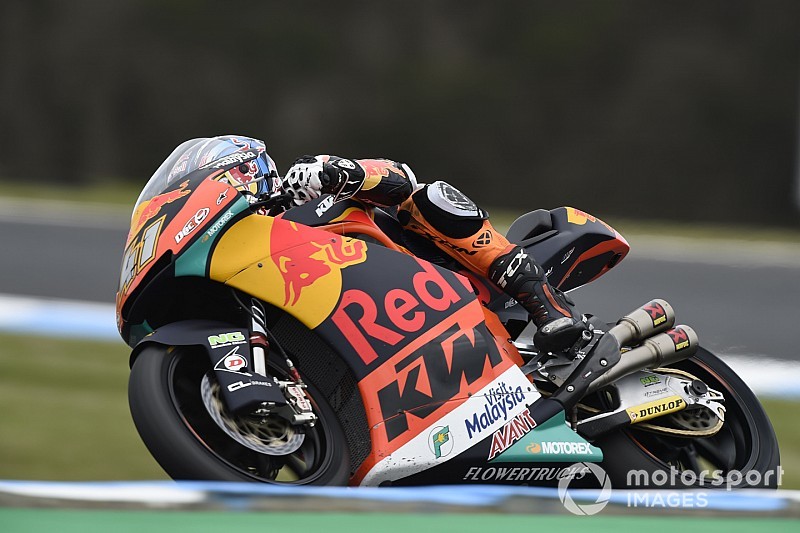 Brad Binder fended off a late challenge from reigning Moto3 champion Joan Mir to win the Australia Moto2 round at Phillip Island on Sunday.

Binder started only fifth on the grid but moved into the lead on lap 3 of 25 with an opportunistic dive down the inside of Xavi Vierge at Turn 2.

The Ajo KTM rider stayed at the front of the field until lap 13, when Vierge and Pons rider Lorenzo Baldassarri both passed him to turn the race into a thrilling three-way scrap for victory.

The three riders continued to exchange positions for the next 10 laps, each having its own stint in the lead.

However, the complexion of the race change when Baldassari slid out of the race at Turn 10 on lap 23.

Shortly after, Mir - who was running closely behind the leading trio - moved up to second behind Binder, while Vierge dropped down to fifth.

Binder and Mir then engaged in a two-way shootout to the chequered flag, with a twitchy moment for Binder giving the Marc VDS rider a sniff of victory.

But the South African just managed to keep his bike ahead on the run from the last corner to the finish line to score his third win of 2018.

Intact GP man Vierge claimed the final spot on the podium in third after making places on the final lap, finishing just 0.007s ahead of Augusto Fernandez (Pons).

Luca Marini finished as the lead Sky VR46 rider in fifth, while Dominique Aegerter (Kiefer), who was initially in running for a podium spot, was classified sixth.

Marc VDS rider Alex Marquez, who suffered another crash on Friday, was unable to keep up with the lead group but finished comfortably ahead of Jesko Raffin (SAG) in seventh.

Marcel Schrotter (Intact) was forced to start from the pitlane after his bike was not ready in time for the formation lap, but put on a stunning recovery charge to end up ninth at the flag, just ahead of Fabio Quartararo (Speed Up).

Championship contenders Miguel Oliveira (Ajo) and Francesco Bagnaia (VR46) were unable to make much progress after their qualifying disappointment and were left to squabble for 11th position.

It was Oliveira who finished ahead of the two, with Bagnaia - who had jumped to fifth in the opening two laps before slipping down the order - simply lacking pace to make an impression on his title rival.