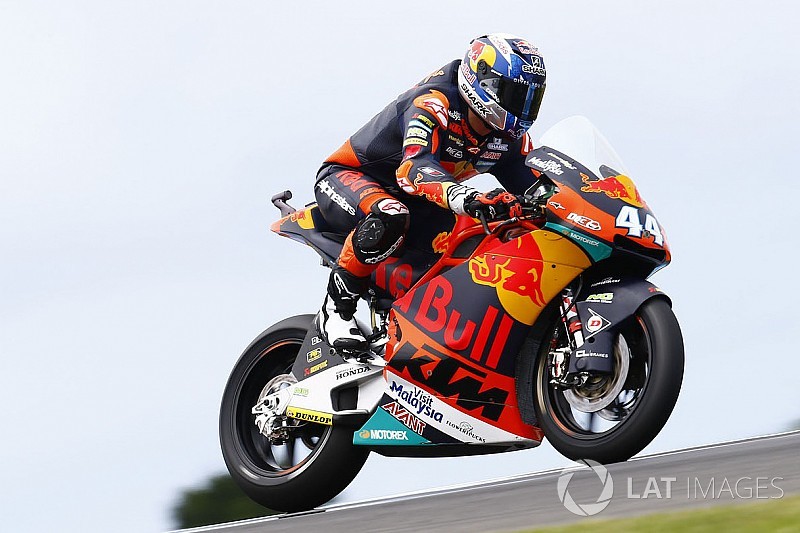 There was a brilliant scrap for second at Phillip Island between championship leader Franco Morbidelli, Brad Binder and Takaaki Nakagami, but Miguel Oliveira left them all behind with a flawless ride to score KTM's first Moto2 win.

A poor start from polesitter Mattia Pasini saw the Italtrans Kalex drop to sixth, while Interwetten’s Thomas Luthi made a bold start to leap from 10th to sixth by the end of the first lap.

On Lap 2, Pasini was wiped out by a high-siding Marcel Schrotter who’d started beside him on the front row, while Binder drafted past Morbidelli into second to make it a KTM 1-2.

Alex Marquez fell to 11th on the exit of Turn 11 as he ran wide onto the wet grass.

By Lap 4, Binder was pulling Morbidelli closer to Oliveira, and Luthi was fourth and 2sec back, having only just avoided the Pasini/Schrotter shunt. Behind Luthi ran Xavi Vierge on the Tech 3 Mistral, Nakagami on the Team Asia Kalex and Luthi’s teammate Jesko Raffin.

By Lap 10, Luthi was 4sec behind the top three and under pressure from Nakagami and Morbidelli had passed Binder for second as the South African ran wide at Siberia.

On the 11th lap, Nakagami demoted Luthi, and Binder was back ahead of Morbidelli after a great sliding pass at Turn 4. But the pair’s constant battling had left them now 2sec behind Oliveira.

Luthi fell behind Vierge on Lap 12 and teammate Raffin on Lap 13, which meant Morbidelli could have settled for third to comfortably extend his points lead, but into the Southern Loop on Lap 14 the Italian slipped ahead of Binder.

The KTM rider moved back ahead at Turn 1, and Morbidelli made contact with his rival, running wide which allowed the charging Nakagami onto his tail.

Binder had started losing pace by Lap 18, so Morbidelli and Nakagami swept past through the first and second corners, the pair now 6.2sec off Oliveira, while Morbidelli’s good news got even better when teammate Marquez demoted Luthi to seventh.

Then the championship favourite got knocked back – demoted by both Nakagami and a resurgent Binder – but on the flipside, rival Luthi was down to 10th.

As rain warning flags started to wave, Nakagami was cutting into Oliveira’s lead, slashing it to 3.5sec with two to go – and then suddenly the Japanese rider was down at Turn 8.

That served as an ample warning for Morbidelli who now backed down and settled for third, turning a 19-point lead in the title race to 29 points as Luthi could only manage 10th.

Vierge had a moment on the final lap, handing fourth place to Raffin, with Marquez grafting his way through to sixth.

Simeon ruled out of Phillip Island after qualifying crash

Navarro to skip Sepang Moto2 round after surgery