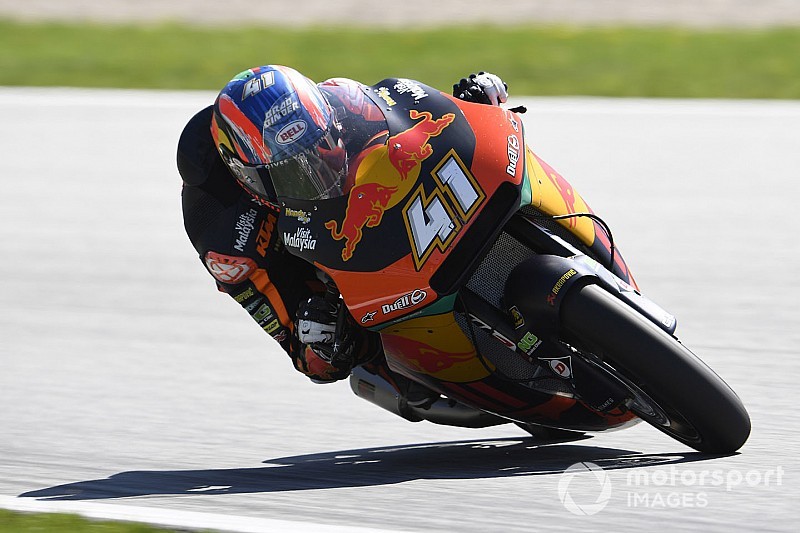 Binder took the lead off the line and, along with Xavi Vierge and pole-sitter Tetsuta Nagashima, broke away from the rest of the field.

But the group's breakaway only lasted three laps when Vierge smashed into Nagashima at Turn 4, resulting in a massive crash.

Binder was given a breathing room thanks to the crash, but was slowly reeled in by a group led by Enea Bastianini.

After some tussling, Remy Gardner got up to second with a triple overtake at Turn 4, and the Australian was soon all over Binder.

Gardner made several overtaking attempts but all of them occurred at Turn 1, and he was unable to make any of the moves stick.

When he ran wide at Turn 1, Bastianini and Alex Marquez joined the fight, but Gardner remained the man to challenge Binder.

Of the top two, it was Gardner cracking under pressure as he went off at Turn 1 again, and hit Marquez's Kalex after rejoining.

Gardner fell in the middle of the circuit as a result, a couple of bikes coming dangerously close to him in the immediate aftermath.

Bastianini was up to second afterwards but he only stayed there for one lap before more drama happened.

In a late-race charge, Luca Marini had snatched third from Marquez, only to then lose his bike at Turn 9 and wipe out Bastianini, who was taken away on a stretcher.

Marquez was next up to chase after Binder but the championship leader did not take any risks and couldn't get close enough to make a move stick.

Binder crossed the line first by three tenths over Marquez, claiming the first win of his and KTM's difficult Moto2 campaign.

With second place, Marquez still extended his championship lead over Tom Luthi, who was only sixth, to 43 points.

Jorge Navarro completed the rostrum, the Speed Up rider taking his fifth podium but still chasing a win this year.

Pons duo Lorenzo Baldassarri and Augusto Fernandez completed the top five from Luthi, who was in podium contention early on but was overtaken by several riders.