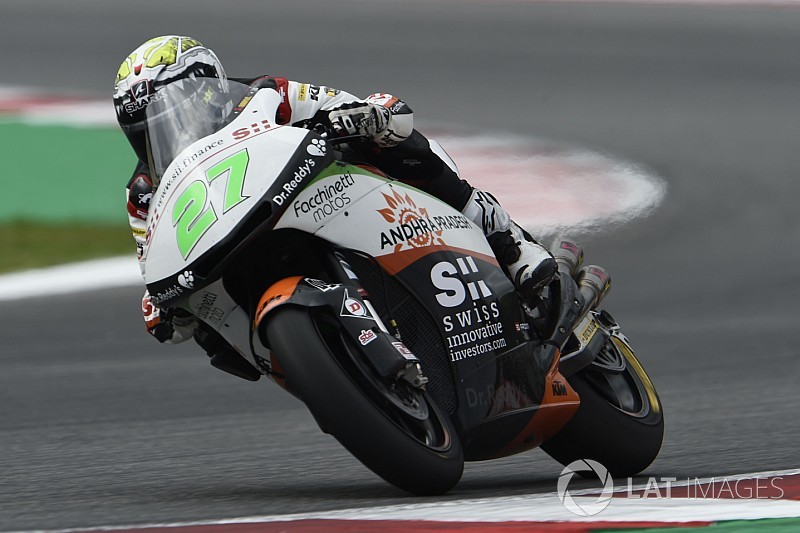 The CGBM Evolution Moto2 team has revealed its 2019 Moto2 line-up, with Joe Roberts joining the team alongside Iker Lecuona.

The Swiss outfit - currently running under the 'Swiss Innovative Investors' banner - has hired American rider Roberts to replace Sam Lowes, who is returning to the Gresini outfit, for the 2019 campaign.

Roberts joined the Moto2 grid in the middle of last year, replacing Yonny Hernandez at the now-defunct AGR outfit, before moving across to RW Racing for 2018.

Using the NTS frame, the 21-year-old from Los Angeles lies 26th in the standings with a sole points finish at Mugello.

CGBM Evolution boss Fred Corminboeuf commented: "We’re very happy to collaborate with Joe. The goal of the team is clear and evident – we want to allow young riders to reach the best level.

"Welcoming an American rider like Joe to ride alongside Iker is great news. He already has some experience in the electronics given his record in MotoAmerica.

"I think he’s a rider capable of adapting quickly and who fits our philosophy perfectly. We hope to have great seasons together."

Roberts himself added: "It’s fantastic, I’m very happy to join the Swiss Innovative Investors team. I kept an eye on the team as a fan of MotoGP and Moto2, and I could see their professionalism.

"Having the opportunity to join the team is a dream come true and I hope we can have a long and successful partnership together."

RW Racing meanwhile has announced Bo Bendsneyder on a two-year deal starting next season. The Dutchman has endured a difficult rookie season in Moto2 with Tech 3, having failed to score any points.

Italtrans Racing has confirmed its line-up for 2019 as well, with Moto3 frontrunner Enea Bastianini stepping up to join Andrea Locatelli and replacing veteran Mattia Pasini - who has been linked to Forward Racing.