KTM has drafted in Spanish rider Iker Lecuona to complete its Ajo Motorsport-run factory Moto2 team's line-up for the 2020 season.

The 19-year-old Lecuona will partner Jorge Martin, taking the ride currently occupied by Brad Binder - who already has a deal in place to race for KTM's satellite team Tech 3 in MotoGP next year.

"I’m really happy to have signed with Red Bull KTM Ajo,” Lecuona said. “I think it is a great step for me and I’ve always wanted to be part of an official team, and one with these possibilities. I’ll be giving 100 percent to make the most of it in the world championship."

Having raced in Moto2 on a part-time basis in 2016-17, Lecuona enjoyed a breakthrough year last season after joining Swiss outfit CGBM Evolution to ride a KTM.

He finished only 12th in the standings, but had outscored his teammate, ex-MotoGP rider Sam Lowes, and bagged the outfit's sole podium of the season with second place in the Valencia finale.

While KTM has endured a difficult start to 2019 following Moto2's switch to new Triumph engines, Lecuona - who had remained with CGBM, now running under the 'American Racing KTM' banner - emerged as one of the manufacturer's benchmark riders.

He occupies 16th in the standings, and was in podium contention last time out at the Sachsenring before crashing out late on.

Lecuona's future teammate Martin had signed a two-year deal with the factory KTM Moto2 outfit during his run to the Moto3 title in 2019.

Martin has thus far scored a best finish of ninth in his rookie Moto2 campaign. 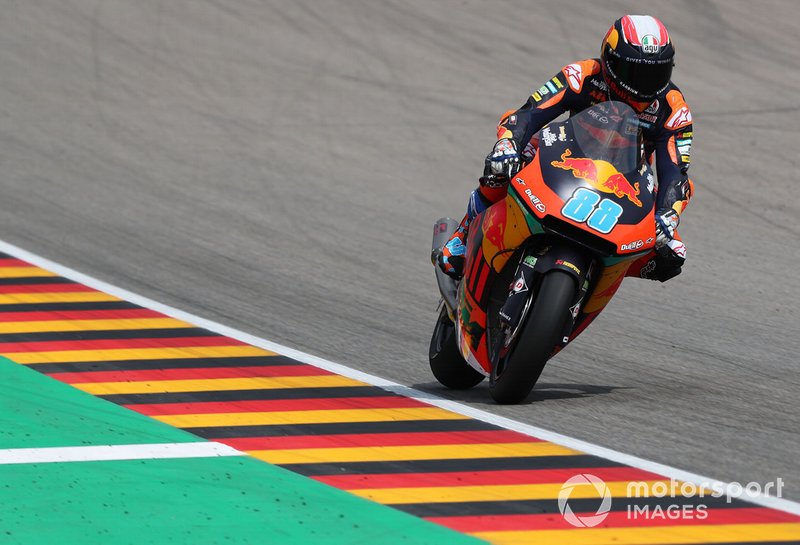 Lecuona ruled out of European GP due to quarantine rules