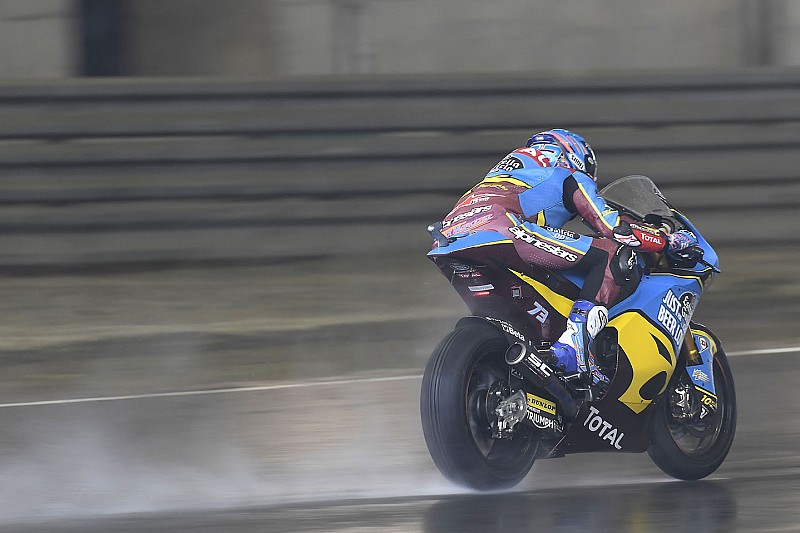 MotoGP champion Marc Marquez says he was “surpassed” by brother Alex’s save in Moto2 practice at Motegi, which he described as a “once in a lifetime” feat.

The younger Marquez, who currently leads the Moto2 standings, was launched out of his seat 15 minutes into Saturday morning's third practice sessionn at Motegi after the rear of his bike stepped out in the final corner of the wet track.

However, he held on to the handlebars despite nearly going over the windscreen and was able to land on his feet, skating along the start-finish straight while continuing to grip the bike and avoiding a crash – ultimately remounting once it came a stop adjacent to the pitwall.

The elder Marquez, who has a reputation for making unlikely saves and has been hailed for this in the past by the likes of Valentino Rossi and Cal Crutchlow, was full of praise for his brother’s “impressive” acrobatics.

“He’s surpassed me. If I did that last year, I would have dislocated the shoulder,” Marquez said, referencing the injury to his left shoulder that required him to undergo surgery in this past off-season.

“I've seen it 50 times and I'm not tired. These things happen once or twice in a lifetime. It has saved a possible injury. I wish I had seen his panicky face under the helmet.”

Equipped with a 40-point lead over nearest rival Augusto Fernandez, the younger Marquez went on to qualify fourth for the Sunday Moto2 race.

“The save, this kind of save you can only do when you are extra concentrated,” his older brother added. “He is in a very important moment in the championship so he's fully concentrated because he wants to do it [win the title].

“He was very lucky - not for save, [but] because they record [it] in a very good way, even in slow motion, so he will have this video for all his career.”