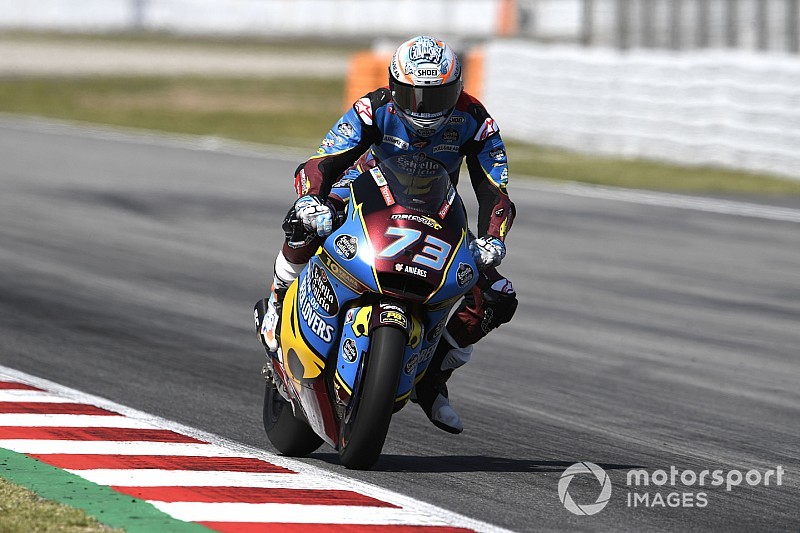 Alex Marquez tallied up a hat-trick of victories in the 2019 Moto2 season after beating Tom Luthi in the Catalan Grand Prix to move into the lead of the championship.

A crash for Lorenzo Baldassarri, who led the standings by two points coming into the round, early on allowed Marquez to head the championship after prevailing in a battle with ex-MotoGP man Luthi.

Luthi grabbed the holeshot at the start on his Intact GP machine, while poleman Augusto Fernandez recovered from a poor launch to keep Sam Lowes at bay in second at the first turn.

The Pons rider seized the lead at Turn 10 on lap five when Luthi ran slightly wide, though his time at the front lasted a lap, with Luthi hitting the front at the first corner at the start of the seventh tour.

Marquez was hung out to dry at the start, and was unable to advance on his starting spot of sixth. However, the Marc VDS rider soon found himself into third, and had closed down the leaders by lap seven.

He took second from Fernandez exiting the last corner, and trailed Luthi by half a second for a handful of laps before firing his bike past at the first turn on lap 13.

Luthi kept the pressure on Marquez briefly, but made several small mistakes at Turn 4 in his pursuit, with the Marc VDS rider twisting the screw with five laps remaining.

Quickly opening his lead out to over two seconds, Marquez cruised to the line to move seven points clear of Luthi in the standings.

Luthi slipped closer and closer into the grasp of third-placed Jorge Navarro as the race wound down, but the Speed Up rider could do nothing to take runner-up spot from him.

Fernandez dropped to fourth at the chequered flag, with Enea Bastianini (Italtrans) being the top rookie across the line in fifth after Navarro's teammate Fabio Di Giannantonio fell out of third on lap 11.

Luca Marini was sixth on the Sky VR46 Kalex, fending off the sister Intact and Marc VDS bikes of Marcel Schrotter and Xavi Vierge.

Lowes's podium hopes faded early on, with the Gresini rider finishing ninth in the end, while Tetsuta Nagashima completed the top 10 on the sole SAG bike across the line.

His teammate Remy Gardner crashed on lap one after contact with Baldassarri at Turn 4, who fell at Turn 10 on lap seven to register his third DNF of the campaign and drop 23 points behind Marquez to fourth in the standings.

Jonas Folger, making his first race appearance since the '17 Aragon MotoGP round as stand-in for the injured Mattia Pasini at Petronas Sprinta Racing, was 19th on his comeback.