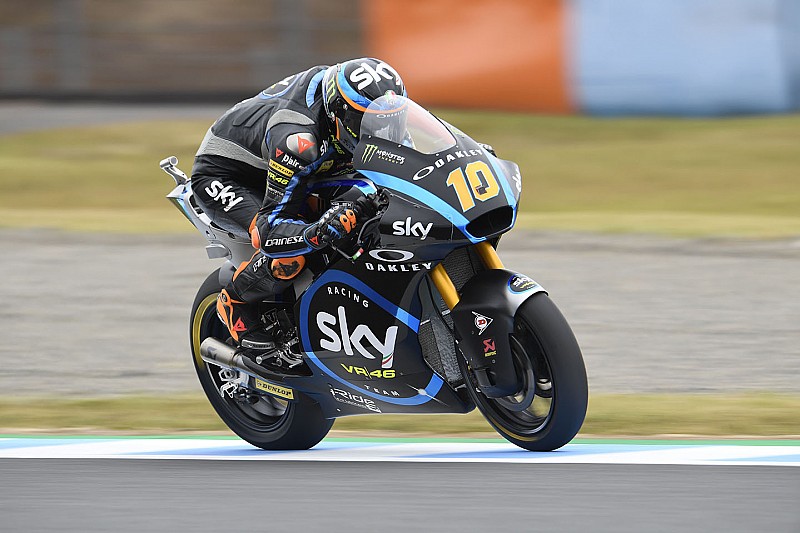 Marini led from pole in the early stages, and mounted a late attack on Luthi to reclaim the position and fend him off to take his second win of the season.

The Italian held the advantage off the line, with Augusto Fernandez and Lorenzo Baldassarri putting their Pons bikes into second and third behind the Sky VR46 rider.

Fernandez countered an attack from his teammate at Turn 3, though would drop to fourth ahead of title rival Marquez at Turn 5 on the following lap after running wide.

Marc VDS rider Marquez engaged with Luthi in the early stages over fifth place, and was lucky to stay mounted after suffering several rear-end moments – including a near-highside exiting the last corner on the second tour.

At the front Marini and Baldassarri had opened up a near-second gap over third-place Somkiat Chantra by the sixth lap, though a failed raid on the lead by the Pons rider at the fast Turn 6 right-hander would wipe out that lead.

At one stage Luthi was able to open out a lead of seven tenths, though Marini regrouped in the closing stages and started to pile pressure on the Intact GP rider.

Behind, Marquez got bogged down in battles with Luthi’s teammate Marcel Schrotter and Speed Up’s Jorge Navarro over sixth place as he continued to struggle for pace.

Marini made a move on Luthi stick on the penultimate lap on Turn 7, and gave the Intact rider no chance to retaliate all the way to the chequered flag.

Luthi’s second marked his first podium since the Catalan GP, and gives his title hopes a small boost: he moves up to second in the standings with a deficit of 36 points to Marquez.

Reigning Moto3 champion Jorge Martin came from 14th on the grid and to seize his maiden Moto2 podium aboard the Ajo KTM, with Baldassarri and Navarro completing the top five.

Brad Binder was lucky to stay in the race when he collided with Sam Lowes in the early stages when he rejoined the track after a massive moment on the grass and recovered to 12th ahead of Chantra, whose podium hopes faded dramatically by mid-distance.

Lowes was not so fortunate, with the contact breaking the left handlebar of his Gresini Kalex.

Also failing to finish were home rider SAG riders Tetsuta Nagashima – who crashed on the sighting lap and the first lap – and Remy Gardner, Tasca Racing’s Mattia Pasini and Tech 3 rider Marco Bezzecchi, who was forced to stop after vomiting in his helmet.