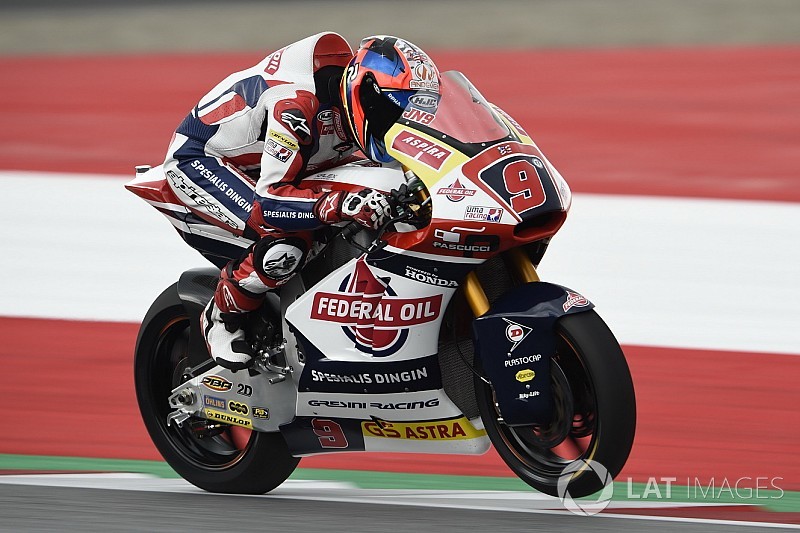 Jorge Navarro will remain in Moto2 with the Gresini team next season, it has been announced.

The 21-year-old Spaniard stepped up to the intermediate class this season after placing third in the Moto3 standings last year, replacing MotoGP-bound Sam Lowes aboard Gresini's sole Kalex entry.

After a slow start to the year, Navarro's results have steadily improved, his best finishes being a pair of sixth places at Barcelona and the Sachsenring.

It leaves him 13th in the standings with seven rounds left, second highest of this year's rookie contingent only behind former Moto3 rival Francesco Bagnaia.

“I’m extremely happy to continue with Team Gresini Moto2 for one more year and to have [sponsor] Federal Oil by our side again," said Navarro. "I feel I’m in the right place with a team that has all the tools to win and fully believes in my abilities.

"It will be great to build on the work we’re doing this year now that we’re getting some momentum on our side. I hope I can continue on this upward trend in the second half of the season.”

Team boss Fausto Gresini added: "We chose to keep our trust in Jorge Navarro and Federal Oil has fully supported our choice.

"We are happy with his performances so far and his progress: it’s important to give some continuity to the partnership with a solid basis as part of a longer-term plan.”