The Marc VDS rider held his nerve in a tense battle with Binder and Luthi to keep his points gap above the required 24 to add to his 2014 Moto3 world title.

Ajo KTM’s Binder grabbed the holeshot and led Marquez and SAG’s Tetsuta Nagashima, while Luthi failed to advance on fifth on the opening lap.

Binder, who needed to win and hope Marquez finished third or lower to keep his outsider title hopes alive, tried to bolt straight away and was seven tenths clear of Marquez by the end of the opening tour.

Behind, Luthi made a crucial move on the sister Marc VDS of Xavi Vierge to move up to fourth and begin the hunt of the top three, while a mistake from Binder on lap four at Turn 8 gave Marquez the lead.

Binder dropped behind Nagashima, but quickly deposed him and clattered his way through on Marquez at the first corner on lap eight.

This battle allowed Luthi to close in on the leading trio, and would move into third at Turn 14 after Nagashima nearly highsided applying the throttle.

Binder once again stretched Marquez to get the lead up to over a second with five laps remaining, while Luthi tried to put pressure on the Marc VDS rider.

Marquez slashed half a second out of Binder on the following lap, but was resisted over the final few tours and eventually surrendered his charge.

Luthi got as close as six tenths to Marquez at one stage, but failed to apply much more pressure and would quickly fade on the final lap.

Binder went unchallenged to the chequered flag to secure his fourth win of the season, while Marquez was left to cruise to the world championship to become the first rider to win titles in Moto3 and Moto2. 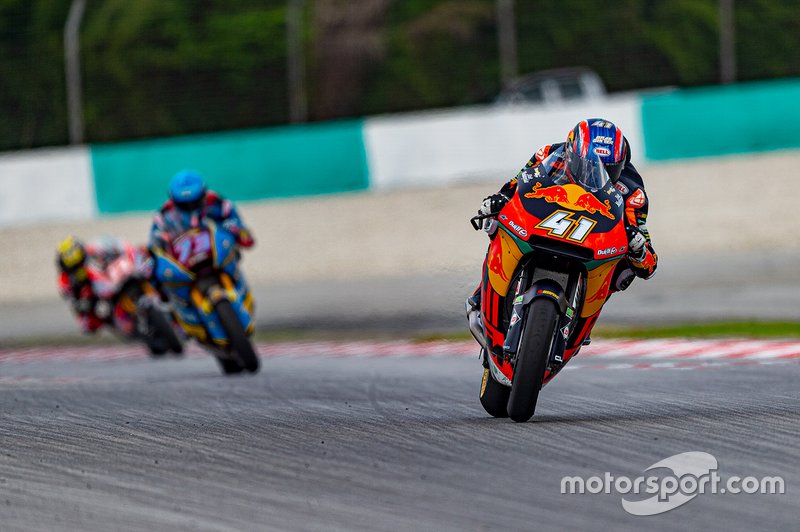 Luthi completed the podium on his Intact Kalex, with Vierge and Speed Up’s Jorge Navarro rounding out the top five.

Tricky track conditions in the high temperatures at Sepang led to a number of crashes, with the likes of Gresini’s Sam Lowes, Tech3’s Marco Bezzecchi, early podium contender Jorge Martin (KTM) and fellow rookie of the year contenders Fabio Di Giannantonio (Speed Up) and Enea Bastianini (Italtrans) all falling into retirement.