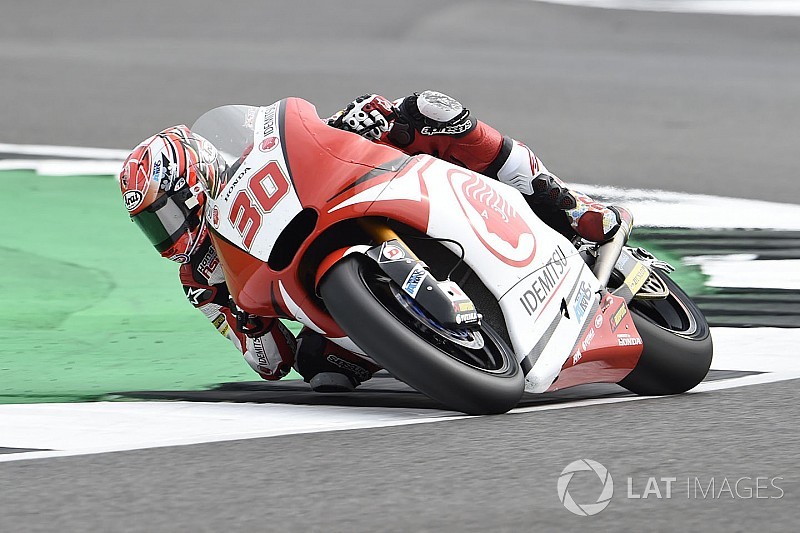 With pole-sitter Mattia Pasini dropping down to fifth after having too big wheelie off the line, Marc VDS duo Marquez and Franco Morbidelli established themselves in the top two early in the race.

Marquez confidently led for a few laps but Morbidelli soon closed in on his teammate, eventually making a move at Stowe on Lap 7.

However, Marquez fought back and reclaimed first place at the same turn two laps later, only to then soon crash out at Village.

Yet, Morbidelli only led for a lap before being dispatched by Nakagami - the Japanese rider initially in a three-way fight for best non-Marc VDS status with Tom Luthi and Pasini.

He managed to lose the aforementioned duo and, while he was a second behind Marquez and Morbidelli when the Spaniard crashed, he made quick work of taking the lead.

Morbidelli also gave up second to Pasini, but made sure to finish ahead of main rival Luthi.

At the front, a late charge from Pasini saw the Italian close the gap to just six tenths, but ultimately he had no realistic chance of demoting Nakagami.

Nakagami scored his second win in Moto2, his first in a year as he last won in last year's Assen race.

Miguel Oliveira was in contention for fourth early in the race, but his KTM bike had a brief gearbox failure, which dropped him out of the top 10. However, he fought back to salvage eighth, just ahead of his teammate Brad Binder and Dominique Aegerter.