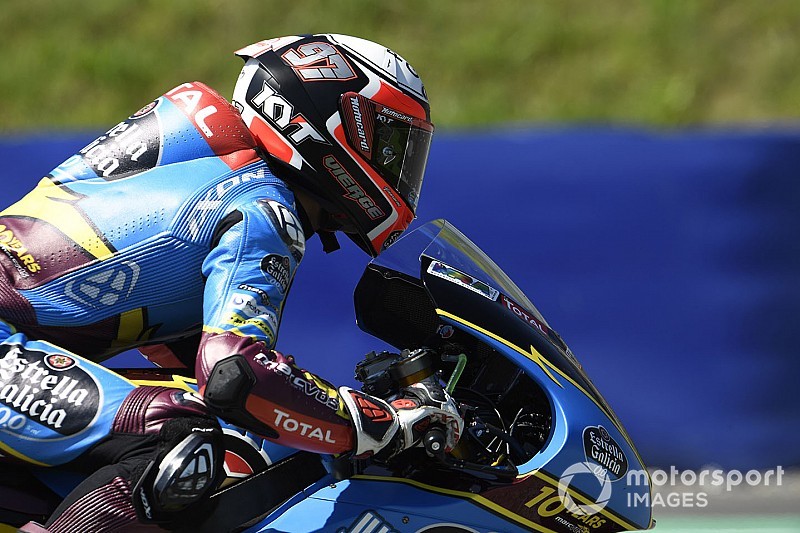 Xavi Vierge will join the Petronas SRT team in the Moto2 World Championship next season, paving the way for Sam Lowes to partner Alex Marquez at Marc VDS.

It marks Vierge's third team change in as many years, the Spanish rider having moved to the Intact GP squad last year from Tech 3 before making the switch to Marc VDS this season in place of MotoGP-bound Joan Mir.

Vierge has suffered a tough year at Marc VDS, with just one top-five finish to his credit leaving him with a slender tally of 39 points in 14th in the standings.

His Marc VDS teammate Alex Marquez had previously been linked with a move to SRT, but re-signed with his current team when that option fell through, and is now set to be partnered by ex-Aprilia MotoGP rider Lowes.

It was confirmed during the Austrian Grand Prix weekend that Lowes would not be retained by Gresini, with Nicolo Bulega – who will leave the VR46 Academy at the end of the year – expected to take his place.

Luca Marini was another rider linked to a seat at SRT, but is now set to stay put at Team VR46 in 2020, with current Tech 3 MotoGP rider Hafizh Syahrin favourite to partner Vierge.

Moto3 rider Marcos Ramirez will step up to Moto2 in 2020, having signed a two-year deal with the American Racing Team squad.

The US-owned outfit, which replaced CGBM Evolution on the intermediate class grid this year, will switch to Kalex bikes in 2020 following KTM's recent decision to end its Moto2 programme.

Ramirez will replace Iker Lecuona, who will join the KTM-affiliated Ajo Motorsport team.

The 21-year-old Spaniard is in his third full season of Moto3, having finished eighth and 10th in his first two campaigns. The Leopard Racing Honda rider lies fifth in this year's standings, and claimed his maiden win earlier this year in Barcelona.

"I think Moto2 is a category that will adapt better to my wingspan and my weight, and I will also have a competitive bike and team, so I have great expectations and eager to start this new stage," Ramirez said.

Leopard has already signed Dennis Foggia and Jaume Masia for the 2020 season, with Ramirez's current teammate Lorenzo Dalla Porta also poised to move up to Moto2.