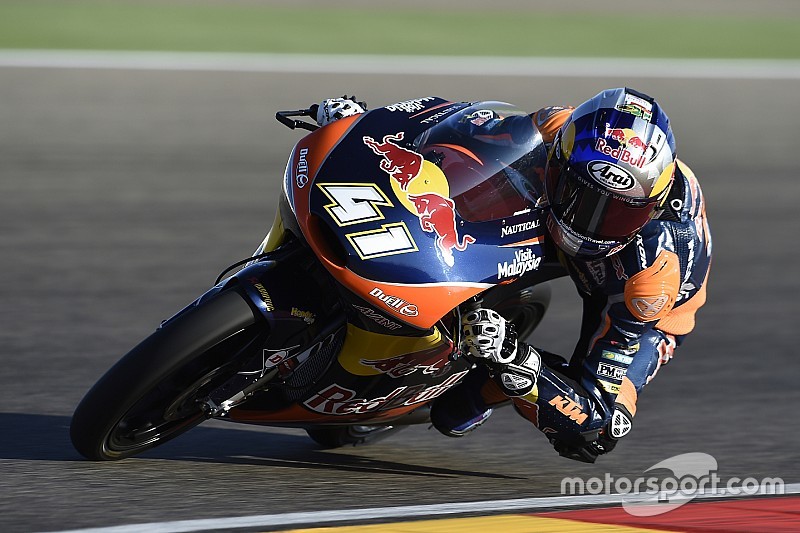 Brad Binder has been crowned Moto3 champion after finishing second in a thrilling Aragon race, wrapping up the lightweight class crown with four races still to run.

The Red Bull KTM Ajo rider arrived at the Spanish venue needing a second place finish to be certain of sealing the title, with a lead of 106 points over nearest rival Enea Bastianini.

And that was the position that Binder took amid a pulsating four-way battle, missing out on a sixth victory of the season by just 0.030s from the Estrella Galicia Honda of Jorge Navarro.

"It doesn't feel real yet," said Binder, who becomes the first South African to win a Grand Prix motorcycle title in any class since Jon Ekerold in 1980.

"The race was tough, it came down to the final lap. I knew where I had to be and I gave it a try, but I was so terrible in the final corner.

"Today we lost the battle, but we won the war, so I'm really happy."

Binder moves up to Moto2 next season with the new Ajo-run KTM effort, where he will partner former teammate Miguel Oliveira.

On the penultimate lap, Binder had not been in a position to win the title as he ran fourth with rival Bastianini - who had to win to keep himself in realistic contention - leading.

The sole KTM man against three Hondas, Binder carved his way past both di Giannantonio and Navarro, only to then drop back behind both some corners later.

Repassing di Giannantonio, Binder found himself third on the critical run to the final corner, but with the advantage of a double slipstream as Navarro drafted by Bastianini.

Darting to the outside, Binder braked impossibly late and for a fleeting second looked as if he would be able to sweep around the outside of both his rivals for the win - but Navarro just tucked his Honda back underneath the KTM to seize the advantage and his second win of the year.

But second ahead of Bastianini and di Gianntonio was enough for Binder, who now has an unassailable points lead of 111 with just 100 left to play for.

Joan Mir was fifth, a further 1.5s behind the leading group, after a superb comeback from a lowly P24 on the grid, the Leopard Honda rider narrowly heading the lead Mahindra of Jorge Martin and Navarro's teammate Aron Canet.

RBA teammates Gabriel Rodrigo and Juanfran Guevara were eighth and ninth, ahead of Phillip Oettl - who ran with the leaders in the middle part of the race before dropping back to 10th late on.

Martin on high with Moto3 results in second half of 2016