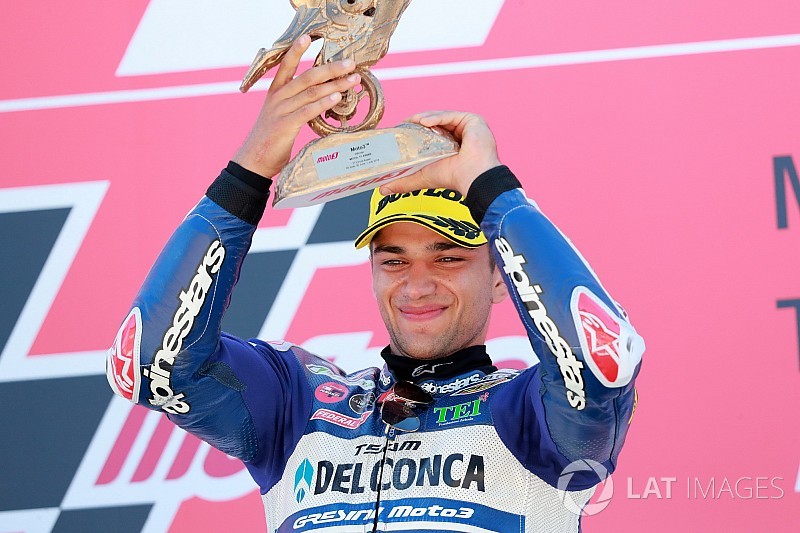 Martin led off the line from his record-breaking 14th pole position, and tried to initially create a gap to the pack was closely followed by Enea Bastianini, Aron Canet, John McPhee and Bezzecchi, who came up from ninth on the opening lap.

Martin had an advantage of 0.8s while they squabbled for second, but after Canet picked off Bastianini and Bezzecchi in one lap for second, he hauled in Martin and brought the chasing pack with him.

Several lead changes ensued as KTM pair McPhee and Bezzecchi would power past the less punchy Hondas through Hoge Heide, but would come under challenge again through the Timmer chicane and into the first corner.

Bezzecchi ran wide on the exit of Turn 1 with three laps to go, allowing Martin through and handing him a significant advantage of 0.5s to McPhee when he passed his fellow KTM rider.

But McPhee crashed at Turn 9 after losing the front end of his CIP-run bike, and Prustel GP rider Bezzecchi also ended up in the gravel on the final lap of the race while running fourth.

That meant Gresini Honda man Martin took the victory, becoming the first Moto3 rider to do so from pole in Assen, and takes a two-point lead in the championship from Bezzecchi.

Bastianini (Leopard Honda) came up the inside of Canet (Estrella Galicia Honda) at Hoge Heide for second on the final lap, but Canet fought back into the Timmer chicane to secure the position.

Bester Capital KTM rider Jaume Masia led the second group battle for fourth from 15th on the grid, ahead of Prustel’s Jakub Kornfeil, who came up from 23rd after taking a 12-place grid penalty for irresponsible riding in free practice.