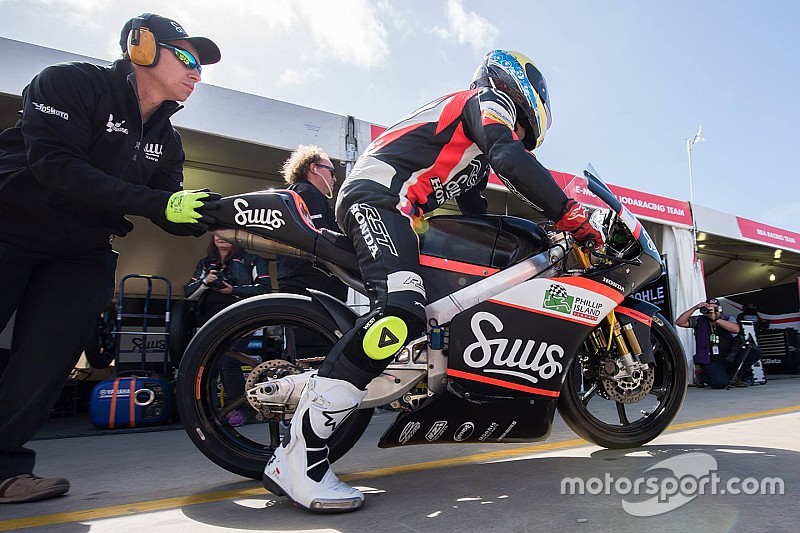 The Geelong rider will make his second Wildcard start at Phillip Island this weekend in the Moto3 category, something that he hopes will help make an overseas ride materialise after falling short of a budget for the 2016 Moto3 season.

Barton’s options include a full-time Moto3 campaign, or a tilt at the CEV series in Spain.

“We had options to go full-time this year in the World Championship, but unfortunately we failed to raise the money,” he told Motorsport.com. “We had a few partners that were interested in doing it, but the timeframe we were given to try and raise the funds was very short. That cost us in the end, because we just couldn’t do it.

“There were then plans to go to CEV, but we just had a few too many commitments over here.

“For next year, though, we’re definitely looking overseas. We’ll see what happens this weekend. Hopefully it’s the same sort of offers that come up to go into the World Championship next year. Although it’s probably more realistic to go over to CEV to pick up my pace a bit, learn the European lifestyle, things like that, before going into the World Championship full-time the year after.

“But everything that we’re doing is a full-time plan for the next five or six years. If we decide not to go down the Moto3 path after next year, we’ll look at Moto2 and look at doing Wildcards whether I’m riding overseas or back here [in Australia] running my own team.”

Barton, a regular in the Australian Moto3 series, made his World Championship debut at Phillip Island last year. But while he managed to qualify for the race, a blown engine meant he didn’t make the finish.

Heading into his second Moto3 Wildcard entry at The Island, he says he’s less focussed on results and more on getting closer to the World Championship regulars.

“Results are something that are hard to talk about with these Wildcard entries,” he added.

“In the past if you’d interviewed Wildcard riders they would say that Top 20 or Top 15 was realistic, but in this day and age, a Wildcard just isn’t going to get that far. Previously, when you had the Bayliss and Vermuelen Wildcards where they were given proper factory bikes, yeah Top 20s were achievable. But last year we were consistently 20km/h too slow down the straights, so that’s not a bike that’s going to be competitive or capable of getting a Top 20 result. Even just to qualify last year was an achievement.

“This year, it’s more of a personal goal. I want to bridge the gap to the back of the field, and maybe even have one or two riders behind us. That’d be an enormous achievement for us, and I think for any Wildcard.

“If we can get below a 1m40s lap, we know we’ll be on a pace where we’re going to be with the back of the field, whereas last year we were two or three seconds a lap off the pace anyway. We believe that was purely motor, not our own skillset.

“We’re confident with the engine configuration that we’ve got [this year] we’ll be able to lift the top speed and lift the power of the bike in general.”

Queensland Raceway front staight to be named after Dick Johnson