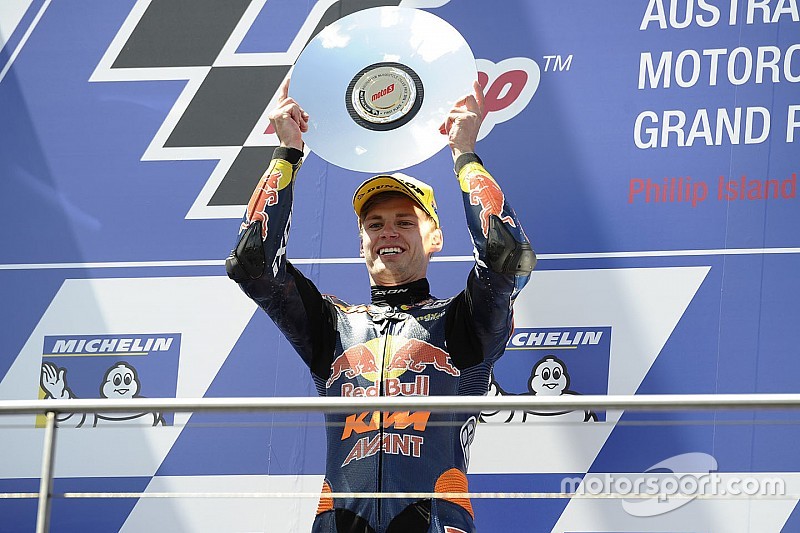 Reigning Moto3 champion Brad Binder cruised to his sixth win of the season at Phillip Island, unfazed by a red flag interrupting the race.

Starting from pole, the South African kept his cool all through the red-flagged and then restarted race, keeping a good buffer out front ahead of his closest rival Andrea Locatelli.

Meanwhile, the battle for the final podium position heated up in the closing laps of the shortened 10-lap dash after the restart, with as many as 16 riders involved in the tussle in a usual Moto3-style race.

Not that it was any concern to Binder, as the 2016 champion took a dominant win over Locatelli with 5.937s separating the two over the finish line.

A fair way back, and after a number of changes, it came down to Aron Canet and the winner’s brother Darryn Binder on the final lap for third.

Despite the valiant effort from Darryn after his Lap 1 crash, the Platinum Bay rider lost out on the finish line with Canet slipstreaming past the South African – the two separated by mere 0.048s.

Behind the Top 4, Livio Loi finished fifth with Aspar Mahindra’s Jorge Martin sixth, the Spanish rider also making progress having after stalling on the restart.

Meanwhile, Marcos Ramirez made it a brilliant day for the Platinum Bay team, taking his first championship points in seventh, having run as high as third.

The race was stopped after the first five laps, a manic start seeing 14 riders crashing out, including two major pile-ups.

The start saw Darryn Binder, Joan Mir and Khairul Idham Pawi colliding on Lap 1, with the latter two retiring, while Darryn managing to continue in the race.

The incident saw Pawi’s Honda destroyed and the Malaysian rider is believed to be a non-starter in next weekend’s Sepang race with the bike beyond repair.

Few laps on, Nicolo Bulega also crashed out from the lead group and the following lap saw Fabio di Giannantonio, Francesco Bagnaia retiring after the former got hit by Gabriel Rodrigo.

With di Giannantonio having nowhere to go, the Italian touched with fellow countryman Bagnaia, taking him out in the process.

In what looked like an awful hit, Bastianini ran over McPhee – but fortunately all riders were later cleared as being conscious.

Medical checks continue for the Scottish rider, although early reports suggest that he is conscious and moving his legs and arms.