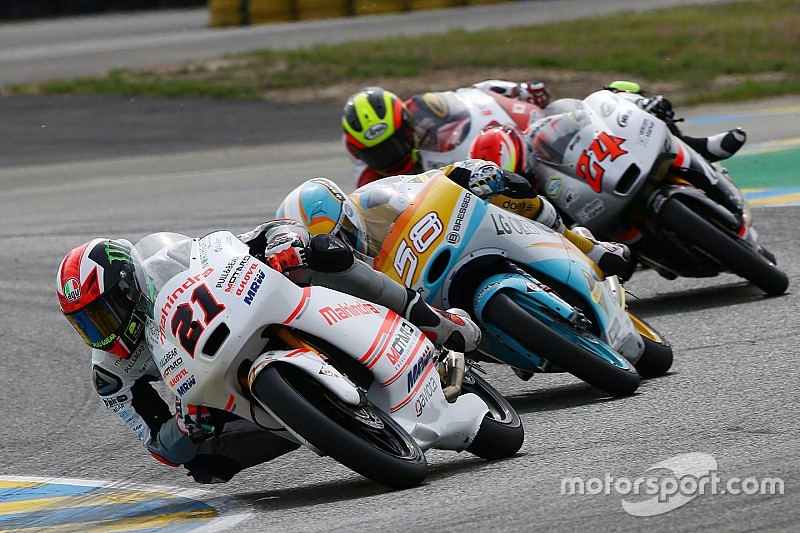 Aspar Mahindra's Francesco Bagnaia was left unhappy after a difficult Le Mans weekend for the team, despite two riders scoring points for the Indian manufacturer.

The Italian teen came into the fifth round on the back of his second podium of the season, aiming to once again fight the top group.

But, having qualified 19th, Bagnaia had some faster bikes ahead to tackle and thus, he had to be satisfied with a 12th place finish, in the race.

"This has been a difficult weekend for us," lamented Bagnaia. "On Friday we were fast, but qualifying and the race, it was too difficult to find speed on the straight.

"I couldn't get the most out of the engine and we were losing a lot of speed on the straights.

"I am a little disappointed because in the last race I finished on the podium and here we struggled even to score points," he continued.

"The other Mahindras were better than mine, hopefully we'll have some improvements from Mahindra for the next race, in Mugello, a round that is really important for me," he added.

The Indian manufacturer, in their post-race release, revealed the "stop and go" nature of the Bugatti circuit didn't play into their hands, as the MGP03 suits more the faster circuits.

Teammate Jorge Martin, having started from 23rd, finished 18th, with a gearshift issue in the mid-corner, which made the race more difficult for the Spaniard.

"We have a new gearshifter for Mugello that seems like it should work better, so hopefully we can be fighting for a good result in Mugello.”

CIP's Tatsuki Suzuki was the best Mahindra rider on Saturday and in the race, on Sunday, was involved in a hefty fight with Bagnaia.

Though the Italian won the battle, the Japanese rider finished 15th, scoring another point, after Jerez.

While the Peugeot duo of Alexis Masbou and John McPhee finished 19th and 20th, returning from injury, Team Italia's Stefano Valtulini, got his best finish of 22nd, of the season.

It was yet another retirement for Platinum Bay's Darryn Binder and Karel Hanika, third successive non-finish, for the duo.