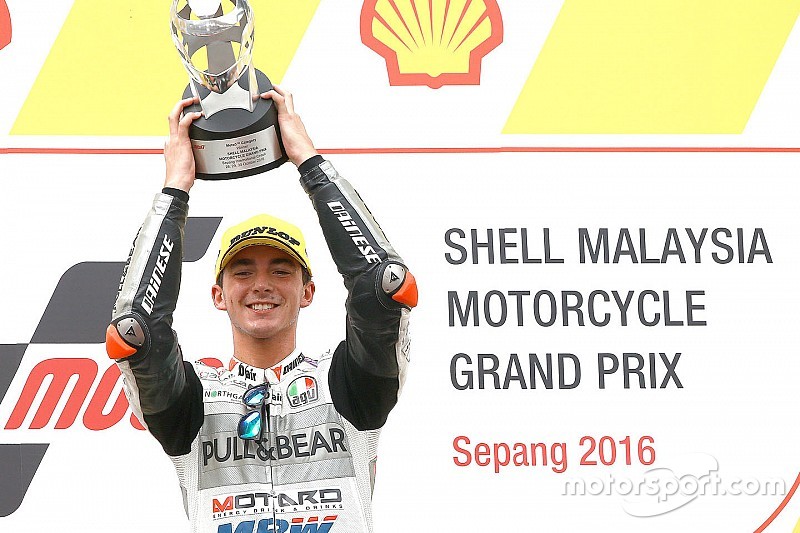 Aspar Mahindra's Francesco Bagnaia says the Malaysia's Moto3 weekend was probably the best of the season, after the Italian converted a front-row start to a dominant win.

From then, it was all-Baganaia show as the Italian teen created a healthy buffer over closest rival Jakub Kornfeil and remain unchallenged for the rest of the race to claim his second win of the season.

"I think that was the best race of my life. It is never easy to ride at the front on your own. You have to learn where the limit is and try to stay as fast as possible," he said after the win.

"I think I have matured because last year I would have struggled to make a race like this, so we have taken a big step forward and I have to thank the team a lot.

"This has probably been our best weekend of the season, at the end of a year that has turned out to be very positive.

"Once I saw my rivals crashed out I decided to push hard to make a break, which then allowed me to calm down.

"The tyres started to drop and in the corner where those guys crashed there was a little oil so I had to be careful not to crash myself.

"Now I am up to third in the championship, which is important as we look to Valencia," he added.

Teammate Jorge Martin had his luck turn to worse when he had a high-side and crashed in Lap 1 at Turn 6, taking out several of his rivals.

The Spanish rider was taken to the medical center for precautionary checks and was then airlifted to the hospital nearby where it was revealed that he has been diagnosed with a concussion.

While Bagnaia took the win, it was a good day overall for the Indian manufacturer with five other riders finishing in points.

Further back, Team Italia duo of Stefano Valtulini and Lorenzo Petrarca were classified 13th and 14th, both claiming their first-ever world championship points.

Joining Martin in the retirement list were Peugeot's Albert Arenas and CIP's Tatsuki Suzuki, while teammate Fabio Spiranelli did not start the race after his crash in practice.

Having fewer Moto3 bikes in 2017 a boost, says Mahindra