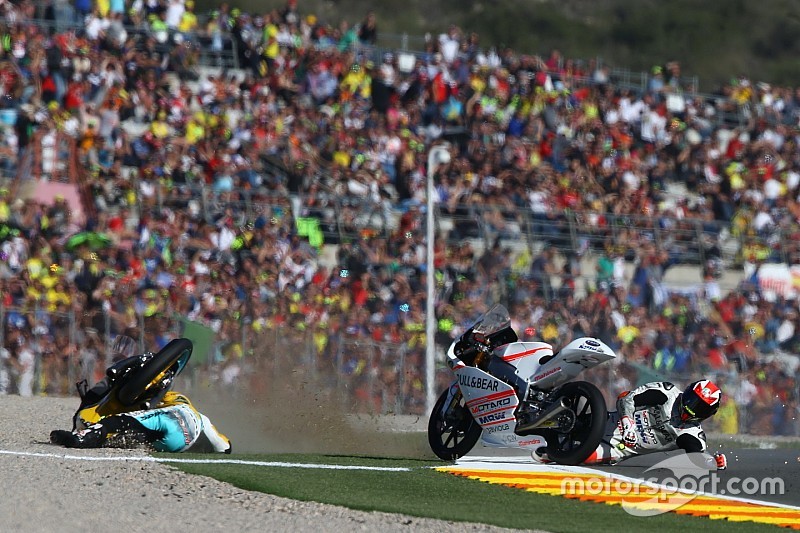 Aspar Mahindra's Francesco Bagnaia was left disappointed in the final Moto3 race at Valencia which cost him third place in the riders' standings.

The Italian came together with RBA Racing Team's Gabriel Rodrigo on Lap 1 when the Argentine lost control of his KTM catching Bagnaia offguard, resulting in both retiring.

"I am okay from the crash, just hurting for myself, the team and Mahindra because we deserved third place in the championship this year," the VR46 academy rider said.

"I have to say thanks to team RBA for these three last races because Rodrigo touched me two times in three races. I can’t say anything right now because I’m a little angry.

"I would have been happy to finish in the top three but today we couldn’t. I have to say thank you to Aspar and Mahindra for the year," he added.

Bagnaia eventually finished fourth in the order beaten by Jorge Navarro, with two wins and four podiums to his name - his and Mahindra's best result so far in the riders' championship.

“It was a hard race. I started really well and I pushed very hard to stay with the front group but they were maybe two or three tenths faster than me," the Spanish rider said.

"I just couldn’t go with them at the start. Then I picked up the pace but I was in a group with a lot of fighting and this was disturbing me.

"Finally I made two great laps at the end to get tenth position. It’s not the result I expected today but it has been a great two years with Mahindra and with Aspar. Now we look towards the future.”

Martin ended 16th in the championship with the lone podium finish and seven points scoring races despite having missed the two rounds.

Platinum Bay ended its association with the Indian manufacturer with Binder finishing inside the top 15 for the third consecutive race.

The South African was involved in a fight with Martin and Fernandez for 10th, but was pipped by both the riders in the final laps to end 12th, whereas teammate Marcos Ramirez did not finish.

CIP's Tatsuki Suzuki was agonisingly 0.592s away from scoring a point in his final race abode the Mahindra, while its new signing Enzo Boulom was 30th.

Behind, the Peugeot duo were closely matched as Vincente Perez led his more experienced teammate Albert Arenas in 23rd.

At the end of a successful season, Mahindra scored 211 points with two wins and five podiums, whereas sister team Peugeot had 55 points scoring a lone win.

Valencia Moto3: Binder comes back from 22nd to win finale