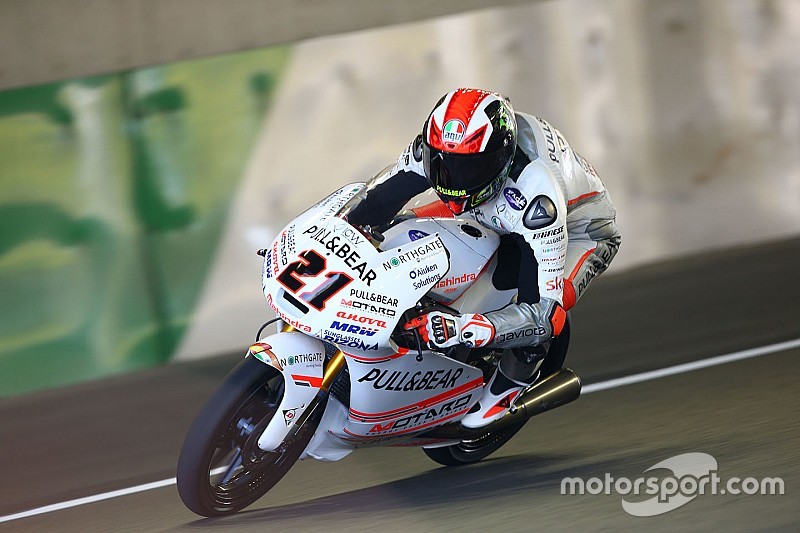 Aspar Mahindra's Francesco Bagnaia believes the team having solved the issues they suffered in practice, needs more grip on the rear to deliver a top 10 result on Sunday.

The Italian finished 12th at Twin Ring Motegi circuit, just over half a second from polesitter Hiroki Ono's time.

"We have managed the twelfth fastest time today but I am on the limit," said Bagnaia after qualifying.

"We are losing time shifting down through the gears so we have been working to try and understand what is going on with the gearbox.

"We solved the problems we encountered this morning and now we are also looking for more grip on the rear,"the VR46 academy rider explained.

"Our pace is good so we will see how the race pans out for us tomorrow.”

Meanwhile, teammate Jorge Martin battled through pain and took part in qualifying, after injuring his leg in practice on Friday, finishing 23rd, just 0.954s behind Ono.

"My leg hurts and it is hard for me to complete more than two laps at a time," the Spaniard said. "I will try to get a good start and hang on.

"We'll see how the leg responds to the medicine I am taking and if it improves for tomorrow."

While Bagnaia ended as the top rider for the Indian manufacturer, sister team Peugeot's Albert Arenas was right behind at 13th, 0.060s separating the two.

The Spanish rider, who is to replace Martin in the factory team next season, has shown progress and strong pace during the practice.

His teammate John McPhee lines up 16th, finishing under a minute of polesitter's time, with the top 23 riders covered by mere 0.954s.

Kornfeil, Pulkkinen to ride for Peugeot in 2017 Moto3 season