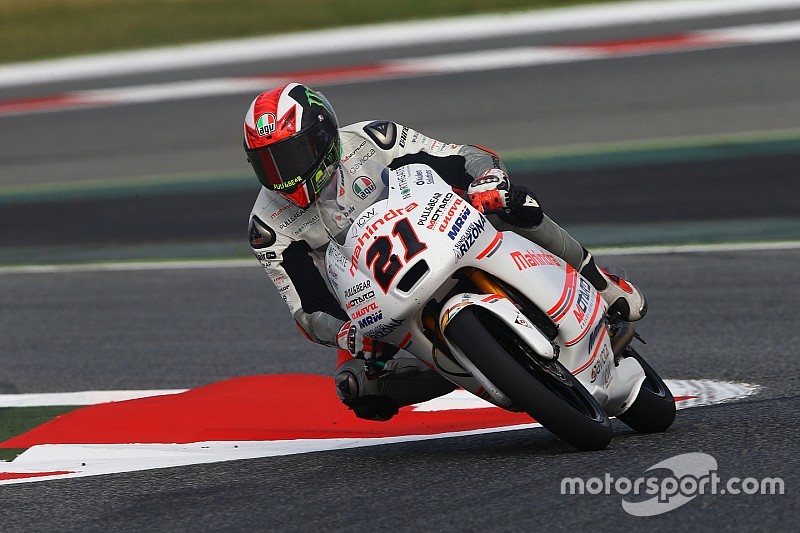 Aspar Mahindra lead rider Francesco Bagnaia thinks conserving the Dunlop tyres will be key to attain a good result in the Moto3 race on Sunday.

The Italian qualified seventh but felt he had more time after he was stuck behind fellow rivals on his last attempt.

"In the last laps of qualifying I lost a lot of time when I got stuck behind other riders, but starting a Moto3 race in seventh is very good," he said after qualifying.

"We have done good work in practice and qualifying and we have good pace for the race on Sunday.

"I will do my best and stay in the front group and try to achieve another good result for my team," he added.

In a tight session, the VR46 rider finished just 0.415s behind polesitter Brad Binder on a revised Circuit de Catalunya-Barcelona, after the tragic incident on Friday.

The 18-year-old added while the Formula 1 layout doesn't give any advantage to its bike, they don't stand to lose time either and stressed tyres will be key in the race.

"We had to change the settings a bit [due to layout changes] because you have to brake more and really stop the bike," he starts.

"The new setting we tried in FP3 was much better, and I think we’ll take another big step in the Warm Up to try and find a setting that will also conserve the tyres in the race."

Mahindra have also provided a new gear shifter to all the customer teams this weekend but they all are still assessing whether they want to use it in the race.

Arenas leads the pack behind

Meanwhile, wildcard entrant Albert Arenas led the Mahindra pack finishing 17th, the Spanish rider was impressive being 0.864s off Binder's time in only his second outing this year.