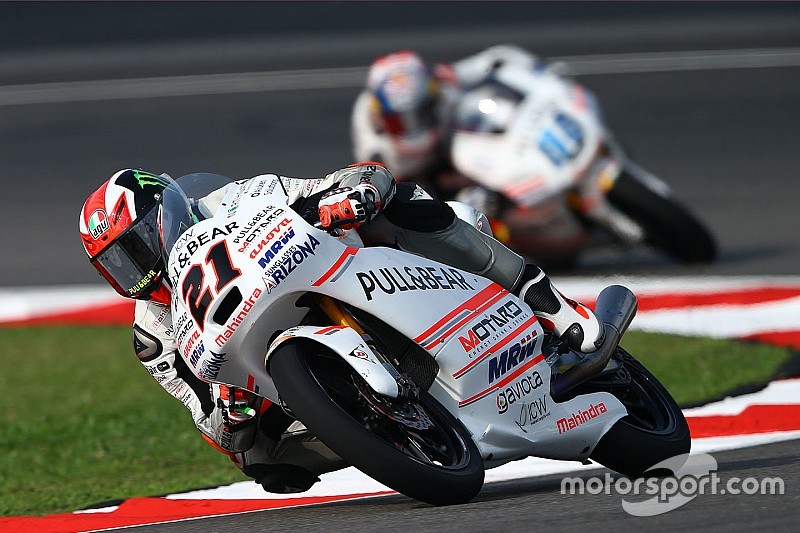 The Italian has shown strong pace throughout the weekend so far ending in the top three in all the practice sessions - including topping FP2.

"It was a very difficult session because at the start we went out with a dry set-up but on wet tyres," the VR46 academy rider said.

"The red flag worked in our favour because it gave us time to correct that and try to recover. In the end third place is a good result for us.

"We are strong in wet and dry conditions so I am sure it will be an interesting race," he added as he looks on to fight for second in the riders' standings.

Meanwhile, teammate Jorge Martin who endured tough practice sessions, had a major improvement in qualifying with a eighth place finish.

"We went out on slicks and than on wets with a dry set-up, and then when we had it just right it started to pour down," the Spanish rider said.

"I was a bit worried because of yesterday but we improved our situation and moved up from 21st to eighth position.

"If it is a dry race we can be up at the front and if it is wet then we are one of the top four. I improved by two seconds from yesterday to today.”

CIP's Tatsuki Suzuki looked good in the mixed conditions at the start of the session, but with others improving, the Japanese rider was 16th in the end.

Behind Suzuki, it was a huge gap with the lone Peugeot of Albert Arenas at 27th heading the rest of the riders abode the Indian manufacturer bike.

Meanwhile, CIP's Fabio Spiranelli did not take part in the qualifying session.