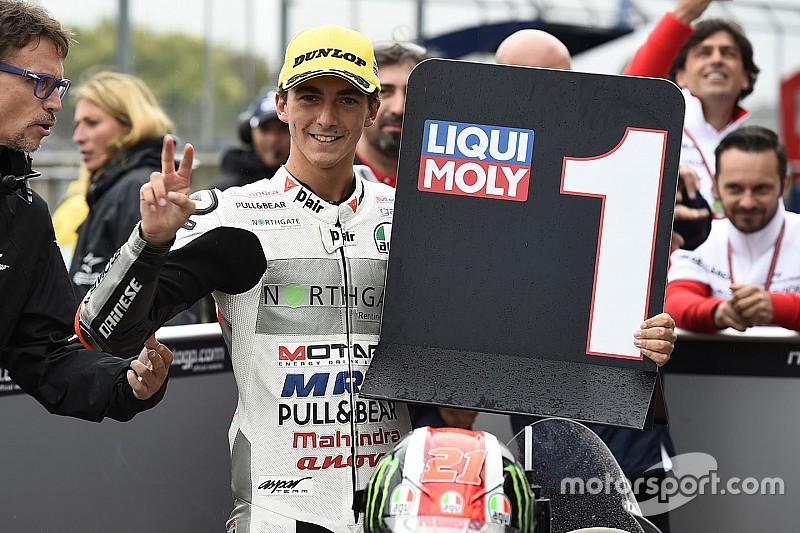 Aspar Mahindra rider Francesco Bagnaia says he is pleased to have taken his first Moto3 pole in wet conditions, and hopes to convert it into his career's second win.

The Italian looked strong all through the damp session with rain falling at Silverstone, managing to clock the quickest lap of 2m33.642s.

He was 0.106s clear of fellow front-row starter Enea Bastianini. “I am so happy with this result, especially after this morning," he said.

"It’s great to get my first pole position, and in the wet where we have had some troubles before. In the last race in Brno I was losing a lot of seconds a lap and it wasn’t easy.

"We changed something just after practice and it was the key to big step that we have done here," the VR46 academy rider added.

Bagnaia stressed on the importance of starting from front and is confident the MGP3O will be quick under both wet and dry conditions.

"To start from the front is very important and tomorrow whether it is wet or dry I will try to push hard from the start.

"In the dry we are in not bad shape, I was able to set some fast times yesterday riding alone. Today in qualifying we made the smart decision to push from the start."

Teammate Jorge Martin looked in the fight early on, but couldn't improve his lap times ending eighth, just over a second off Bagnaia's time.

After taking his maiden win in the last round, Peugeot's John McPhee was in the top 10 at the start of the session until a late fall. Despite the crash, McPhee was able to continue and improve to end 17th.

The rest of the riders using the Indian marquee's bike had CIP's Tatsuki Suzuki in 29th, followed by Team Italia's Lorenzo Petrarca and Stefano Valtulini.

Behind Valtulini was the second Peugeot of Albert Arenas and CIP's Fabio Spiranelli, with wildcard entrants Stefano Manzi and Marco Bezzecchi completing the classification.