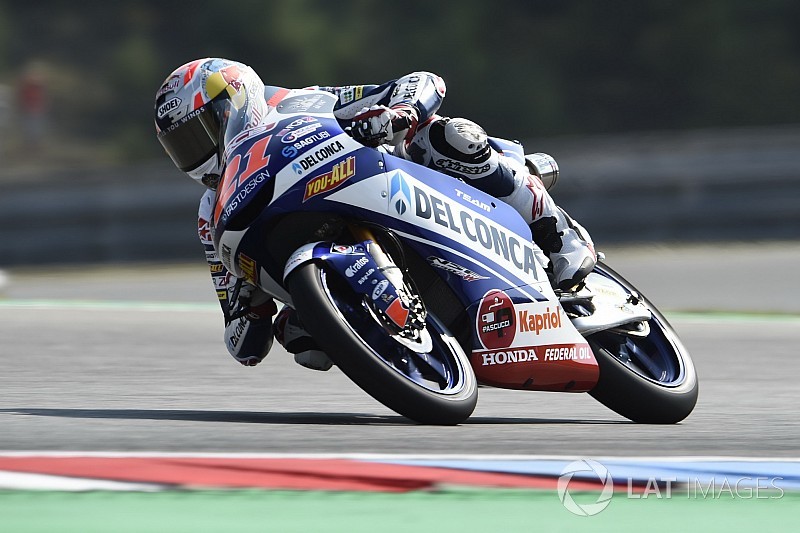 Gresini Honda rider Di Giannantonio prevailed in a hectic conclusion to the 18-lap race, grabbing the lead from local hero Jakub Kornfeil at the start of the final tour and hanging on to win by just 0.112s from Canet.

It was Kornfeil that lead the early running from pole, as the Prustel KTM rider built a gap of nearly a second before being reeled in by the chasing pack.

Marco Ramirez, John McPhee, Dennis Foggia, Gabriel Rodrigo, Philipp Oettl all enjoyed spells out front in the middle part of the race, although McPhee was eliminated from contention when he suffered a crash at the final corner after contact with Ramirez on lap 11.

Kornfeil managed to retake the advantage at the start of lap 13, but was unable to escape this time, and was overtaken by Di Giannantonio several corners later as the pair began exchanging blows over the next couple of laps.

But Kornfeil's chances of a famous home victory were irreparably damaged when he was passed by Canet's Estrella Galicia Honda and then ran wide at Turn 10 on the final lap.

Despite his late charge, Canet couldn't get close enough to Di Giannantonio, whose first Moto3 win comes after 10 previous podium finishes. He was also deprived of an on-the-road victory at Le Mans due to a post-race penalty.

Kornfeil was forced to settle for third, his best result of the season, while Enea Bastianini (Leopard Honda) and Rodrigo (RBA KTM) completed the top five.

Title contender Marco Bezzecchi was sixth, and with pre-race points leader Jorge Martin unable to compete due to injury, the Italian now moves into the lead of the championship by three points.

Honda Team Asia rider Kaito Toba suffered a major crash on the third lap at Turn 4 and was taken to the medical centre, but it was subsequently declared that the Japanese rider had escaped injury.

Martin ruled out of Brno after practice crash

Martin passed fit to return to Moto3 in Austria