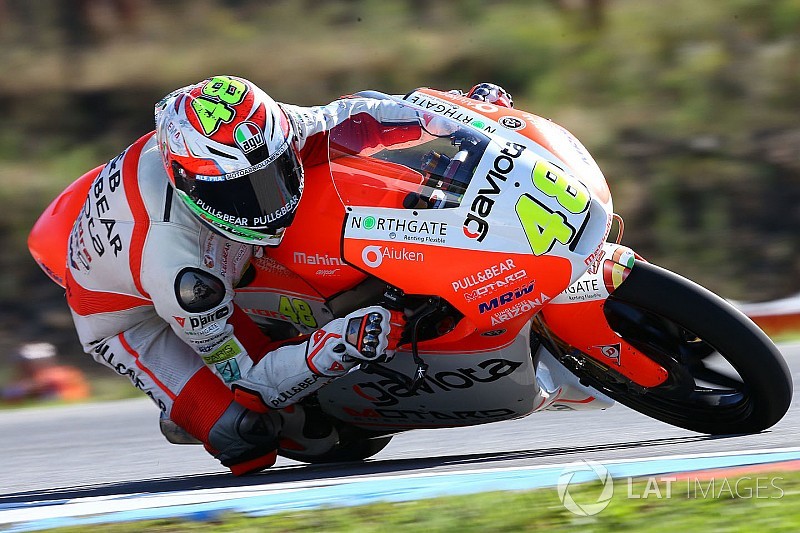 Mahindra Aspar’s Albert Arenas was one of the star riders in the Brno Moto3 race, climbing up from last on the grid to finish in the points.

Making his race return for the first time since sustaining an injury in Mugello, Arenas was forced to start from the back of the pack due to a technical infringement in practice.

However, that did little to deter the Spaniard’s spirits, who, on a damp track, jumped up to 21st by the end of lap 1. He continued his charge over the following 18 laps laps, eventually finishing in 12th place.

“I’m really happy to be back and with this result,” Arenas said after the race. “Coming from last to 12th is quite incredible! But it was really difficult, I had to stay fully concentrated the entire time.

“I felt really good at the start and I pushed and began to overtake riders. I saw that everything was going better and better so I kept going. It was difficult because if I made a small mistake, the gap became very big.

“The key was that I felt good in the wet right at the start of the weekend and we could build from there.”

Mahindra Moto3 boss Mufaddal Choonia was left to wonder what could have been, had Arenas started higher up on the grid, but was nevertheless satisfied with the result.

“That was a great salvage job by Albert,” Choonia said. “It’s not only that he finished 12th from last on the grid, which is very commendable, but even more that there were not a lot of accidents in the race, so this was a genuinely hard-earned position.

“It is a shame he started so far back. He clearly had the pace of the riders from fifth to tenth. We cannot stress enough the importance of a good grid position – but after where he did start, we are happy with today’s achievement.”

Arenas’ teammate Lorenzo Dalla Porta was the next highest Mahindra finisher in 19th, ahead of Peugeot’s Jakub Kornfeil - who, at one occasion, was running in 10th place.