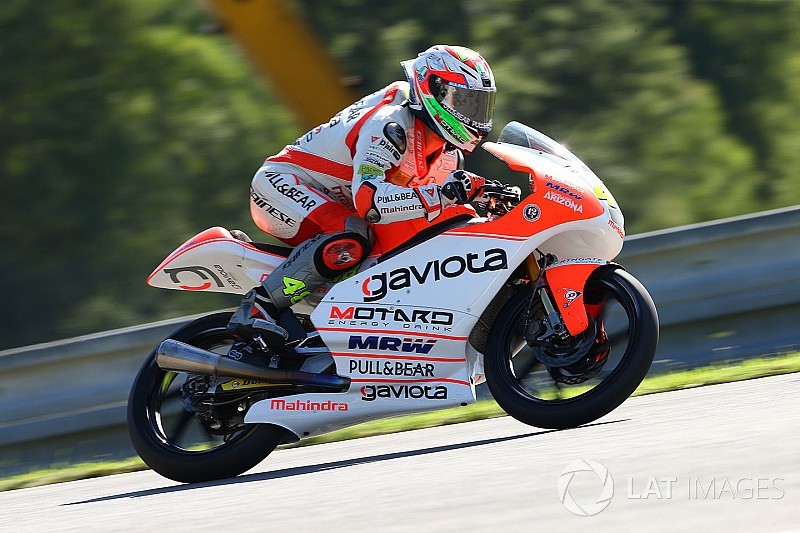 Mahindra Aspar endured a difficult qualifying session at the Brno Circuit in the Czech Republic, with neither of the squad’s two riders finishing inside the top 20.

Due to rain showers in Friday practice, teams had limited dry running ahead of Saturday’s qualifying session.

Mahindra Aspar came off worse because of the weather conditions, with both Lorenzo Dalla Porta and returnee Albert Arenas feeling they couldn’t exploit the potential of the MGP30 due to a sub-optimal bike set-up.

Dalla Porta qualified 22nd on the grid with a time of 2m09.730s, 1.2s off pole-sitter Gabriel Rodrigo, while Arenas will start five places behind in 27th.

“The position is not good, we are a long way back, but we gave our best today,” Dalla Porta said.  “It is so hard to put together a good lap with so many riders on track during qualifying.

“Also we are at a little disadvantage with our engine and I was overtaken by a bunch of riders on my best lap, which didn't help. Maybe we suffered a little bit in terms of set-up after losing yesterday but we are working hard and we're ready to race tomorrow.”

Arenas, who is making his first race appearance since his crash in Misano, added: “I didn't feel comfortable with the set-up of the bike from the start of the session today.

“We managed to change it and I felt better, which allowed me to improve the lap times, but when we put the last new tyre in to try and push for a qualifying time I was passed by a bunch of riders on the straight and they all got in my way. I couldn't get a clean lap in.

“I feel comfortable with the bike in the corners so we will see what the weather does in the morning and try to adapt to the situation.”

Peugeot’s Jakub Kornfeil will join Dalla Porta on the eighth row of the grid in 24th place as the highest Mahindra runner on a non-factory bike.

Manuel Pagliani qualified 28th on the grid ahead of CIP teammate Marco Bezzecchi, who has scored points in three of the last five races.

Where are Indians racing this weekend (August 4-6)

Vinales admits he lost his way on setup for Catalan GP