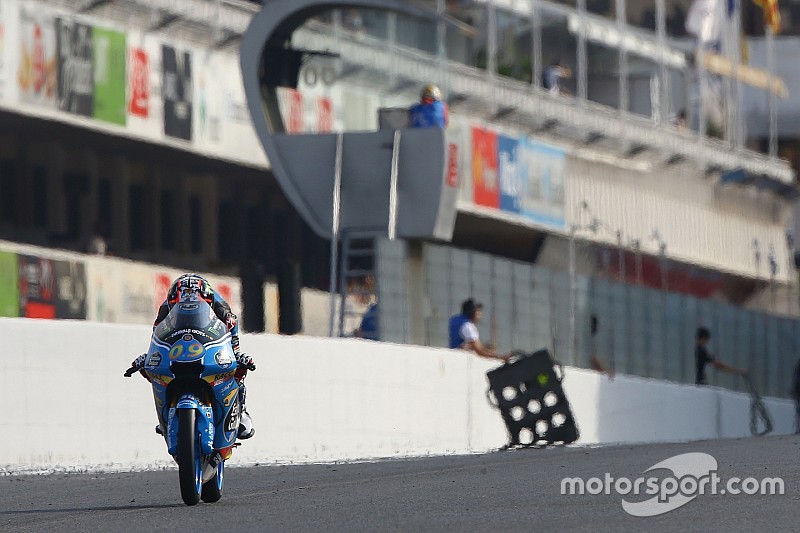 Jorge Navarro claimed the first Moto3 victory of his career on home soil at Catalunya, while points leader Brad Binder recovered from a late-race incident to finish second.

Navarro dropped back to the lower echelons of the leading group after running wide, but was back in the lead in just three laps, having slipstreamed past championship rival Binder on the main straight.

Although Romano Fenati and Bastianini both stole the lead for a couple of laps, Navarro was back in control for the final stages.

He entered the final laps leading by half a second, taking the win by 0.564s at the chequered flag and dedicating his triumph to fallen Moto2 rider Luis Salom.

"Really emotional day for me. This morning I thought 'today I must win', and this victory is for Luis," said Navarro.

"I was always pushing 100 percent. I want to say thanks to the team because the bike was perfect for this race."

Binder fights back for second

Pole-sitter Binder spent the whole race within the leading group but dropped back to eighth in the closing stages when he was hit by Gabriel Rodrigo and forced to run wide at the Turn 14 chicane.

The South African impressively fought back to salvage second, holding off Italian duo Bastianini and Fenati at the finish.

"I don't know where Rodrigo was trying to go, because I was on the inside kerb," said Binder, whose championship lead over Navarro has been cut to 44 points.

"I was so lucky not to crash. I think I had the pace in the last three laps to win, but I'm happy to be on the podium because it easily could have been zero [points]."

Nicolo Bulega was the top rookie in fifth, followed by Aron Canet by half a tenth.

Pawi and Rodrigo both crashed out while running withing the top five during the final laps.