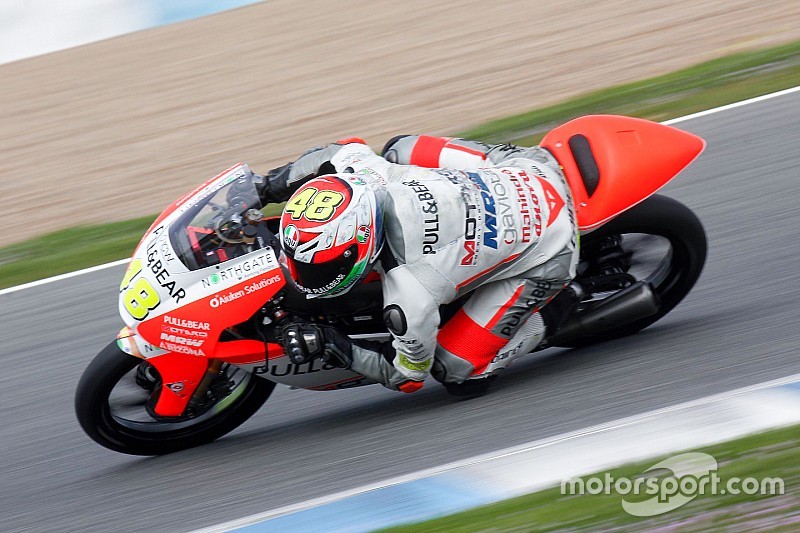 Aspar’s Lorenzo dalla Porta clocked the quickest time for Indian manufacturer Mahindra on Day 2 of the Moto3 test in Jerez.

After an average first day hindered by a wrong set-up, the Italian had a much better outing on Thursday with his personal best time of 1m46.990s, finishing 11th in the order.

Having amassed 59 laps on the MGP3O, dalla Porta was a mere 0.758s from the day’s topper Nicolo Bulega on his Sky Racing’s KTM machinery.

"It has been a very interesting second day and now we are setting some very good lap times. In general it has been an important day because we have managed to find the right way," he said.

"We want to continue like this and take another step forward tomorrow because we are seeing some really positive results.

"I feel more happy than yesterday because we started the day with the set-up from the last test, which I liked a lot, and worked from there, especially with the chassis, to improve my feeling."

His Aspar teammate Albert Arenas was 19th overall, improving on his time in final session. His run in Session 2 was hampered due to a fuel tank issue and thus he could only do 40 laps in all.

"We started the day full of energy, setting a strong pace from the start, but in the second session we encountered a problem with the fuel tank," the Spaniard said.

"[It happened] just when the track conditions were ideal for making improvements. In the third session the conditions were difficult but everybody worked hard to help me improve"

Peugeot’s Jakub Kornfeil finished 14th in the standings, but under a second of Bulega’s time. Remarkably, the Czech had his quickest lap set during the day’s first session.

On the other hand, rookie Patrik Pulkkinen had a difficult day as he ended 31st, where the Finn could only run for 32 laps with a mere nine and three in Session 1 and 2 respectively.

Meanwhile, having enjoyed the first day as the lead Mahindra rider, CIP’s Marco Bezzecchi was only 24th on Thursday, completing 55 laps.