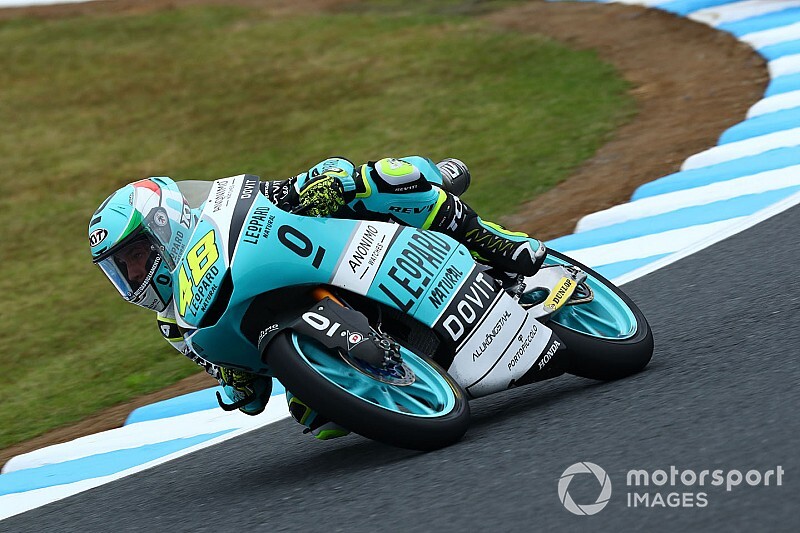 Lorenzo Dalla Porta made a huge step towards the 2019 Moto3 title by taking victory at Motegi, while his two nearest rivals in the points, Aron Canet and Tony Arbolino, crashed.

Leopard Honda rider Dalla Porta took his only second win of 2019 and now has a lead of 47 points in the standings over Canet with three races to go.

Then, title contenders Canet and Dalla Porta moved up the order side by side but, while Canet's challenge on Suzuki was shor-tlived, Dalla Porta was able to slipstream past the Japanese rider at Turn 11 for the lead.

Soon after he moved into first place, both of Dalla Porta's title rivals crashed - Arbolino at Turn 5, having recovered from 27th on the grid to eighth and Canet at Turn 9, having started to struggle to stay with the leaders.

Dalla Porta remainder under pressure from Suzuki, who was able to pass him twice at Turn 5, only for the Italian to immediately retake the place at Turn 7 on both occasions.

The duo entered the final lap of the race in the same order but Suzuki was unable to hold on to second, as Arenas found his way through at Turn 7, and then Celestino Vietti stole the final podium position with two corners to go.

At the front, Dalla Porta won by less than a tenth ahead of Angel Nieto KTM rider Arenas, who followed up his Thailand win with a second place and VR46 rookie Vietti taking the fourth Moto3 podium of his career.

Suzuki settled for fourth with EG0,0 Honda rookie Garcia taking his best result in fifth, the last rider in the lead group.

John McPhee (Petronas Honda) was a distant sixth followed by Jaume Masia (WWR KTM), who lost touch with the lead group as a result of a mistake at the final corner.

Niccolo Antonelli (SIC58), who was on pole despite still nursing wrist and collarbone injuries from Misano, ended up 12th.

Jakub Kornfeil and Gabriel Rodrigo collided at Turn 4 on the opening lap with Tom Booth-Amos soon following suit, having made contact with Can Oncu's bike.

Darryn Binder fell at Turn 11 while running in the top 10 and Romano Fenati, returning after three races on the sidelines, retired with brake failure.