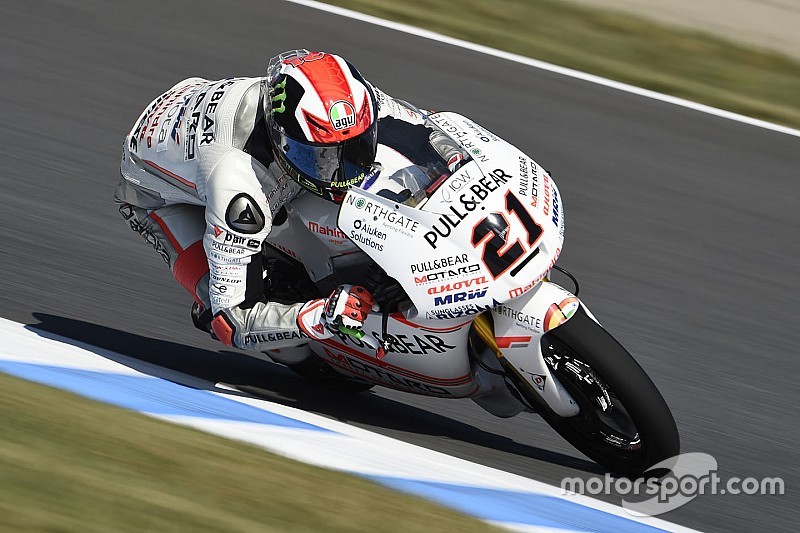 Aspar Mahindra's Francesco Bagnaia says the Japan Moto3 weekend turned out to be more difficult than he had expected, despite the sixth place finish.

The Italian had a dream start to get himself into the top four from 12th on the grid, fighting with the lead group and staying within the podium reach for several laps.

But as the race progressed, the VR46 academy rider's pace deteriorated with the tyres losing performance and he fell back to seventh behind Philipp Oettl and Fabio di Giannantonio.

“It was a tough race, probably one of the most complicated I've done in my life," he said. "In the first lap I gave the maximum to avoid losing touch with the lead group.

"We knew we were losing some time under acceleration so I quickly opened the gas, but soon the tyres started to lose performance.

"At the end I knew they would catch me, I tried to give my best to avoid it. Overall, it has been a difficult weekend. I'm pretty physically tired," Bagnaia added.

The Italian moved up a place to sixth after Hiroki Ono was disqualified from the race, but he is far from being satisfied with the result.

"We knew we were coming here to Japan and could suffer, but I did not think we did [that] well," he said.

"At the beginning of the race, however, we hoped for much more, but when the tyres started losing performance, it was tough. Too bad because I expected to do better.”

Teammate Jorge Martin, meanwhile, also had a great first half sitting ninth, having started from 23rd, but the injured foot gave way and the Spanish rider was forced to retire.

"I was feeling quite strong at the start but then the pain started to come and eventually I was forced to retire," he rued.

"It's a shame because we were quite strong at the start but at least we made it halfway through," adding that he will rest before coming back strongly in Australia.

Apart from Bagnaia, it was good day for Peugeot's Albert Arenas, the Spanish rider claiming his first world championship points.

Arenas originally finished 15th but gained a place because of Ono's DQ. It was the same for CIP's Tatsuki Suzuki, who was 16th, missing on a point by 0.028s.

But the Japanese rider in his home grand prix benefited from his fellow countryman's unfortunate luck, to claim the final point.

It was heartbreak for the other Platinum Bay of Darryn Binder, who ran as high as ninth before crashing and eventually coming home in 22nd.

Meanwhile, joining Martin in the retirement list was Team Italia's Stefano Valtulini, who crashed out early in the race, whereas Peugeot's John McPhee was taken out by Jorge Navarro on Lap 1.