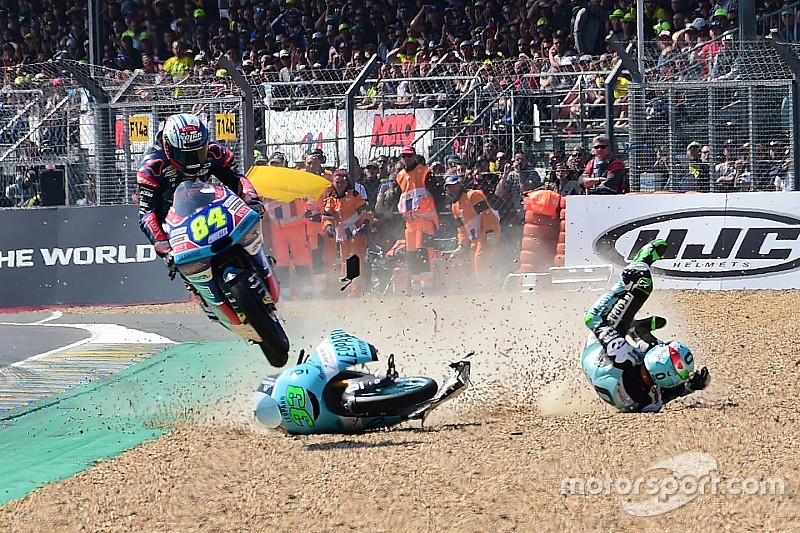 Jakub Kornfeil says his motocross skills helped him pull off his epic save in last weekend's Le Mans Moto3 race, in which he launched into the air off another bike.

Kornfeil was running in the leading group at Le Mans when Enea Bastianini crashed directly ahead of him exiting the final corner, leaving him with nowhere to go.

But the Prustel KTM rider was able to continue by using Bastianini's stricken Leopard Honda as a ramp to launch himself into the air, land in the gravel trap, stay upright and rejoin the race.

He eventually finished in sixth place at the end of a controversial race, which was won by Albert Arenas after on-the-road winner Fabio Di Giannantonio was penalised for corner cutting.

Describing the sequence of events in his save to MotoGP.com, Kornfeil recalled: "I just saw the bike in front of me, so [I knew] I could make the perfect jump.

"I just said, 'ok, it's like during motocross training' – just open the gas, try to survive in the air and stay on the bike. When I landed it was very soft in the stones, I didn't feel anything.

"The problem a little bit was when I was in the air my airbag exploded and this made me a little bit uncomfortable, but when I landed somehow I saved it, I don't know how.

"I just stayed [on] the gas. Going in my mind was only one sentence, 'keep the gas', because I know when you land in motocross you always need to have [the] throttle [opened].

"The only problem was, not my balls, my penis hurt a lot in the last lap!"

Kornfeil added that subsequent analysis of the incident revealed the Czech had jumped almost 10 metres after launching off of Bastianini's bike.

"We checked the data very carefully [with] the KTM engineers from the factory," he said. "I jumped 9.6 or 9.7 metres, almost 10 metres, it's quite long!

"My rear suspension went fully down, and I broke the seat. We use a carbon seat, just one piece, no metal, and this I broke. But I could finish the race."