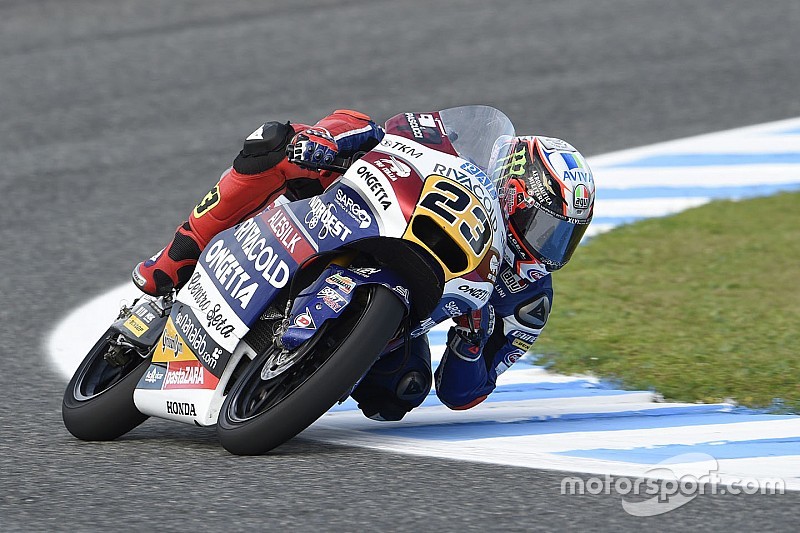 Niccolo Antonelli became the fifth different Moto3 polesitter of the 2016 season, having edged Brad Binder at the very end of a session punctuated by several crashes.

Jakub Kornfeil, overall quickest after FP3, was the early leader but was narrowly pipped by Romano Fenati before the first of two pitstop breaks.

Binder quickly took the lead once back out and, despite him being temporarily demoted by Nicolo Bulega, another improvement saw the championship leader in first place heading into the closing minutes.

Although the South African failed to improve the during the dying stages, he remained the leader until the chequered flag, only to be pipped by Antonelli with a last-second effort.

Sky Racing Team duo  Fenati and Nicolo Bulega completed the top six, which was separated by 0.132s. The latter also suffered a highside crash, from which he walked away, seemingly suffering from pain in his left wrist.

The top 10 was made up by Khairul Idham Pawi and Fabio Di Giannantonio.

Alongside Bulega and Quartararo, a number of rider crashed out, among them Kornfeil, Gabriel Rodrigo, Joan Mir, Adam Norrodin and Fabio Spiranelli.

Mahindra can fight for win at Le Mans, says Bagnaia

Binotto: Results 'not good enough for a team named Ferrari'

Binotto: Results 'not good enough for a team named Ferrari'