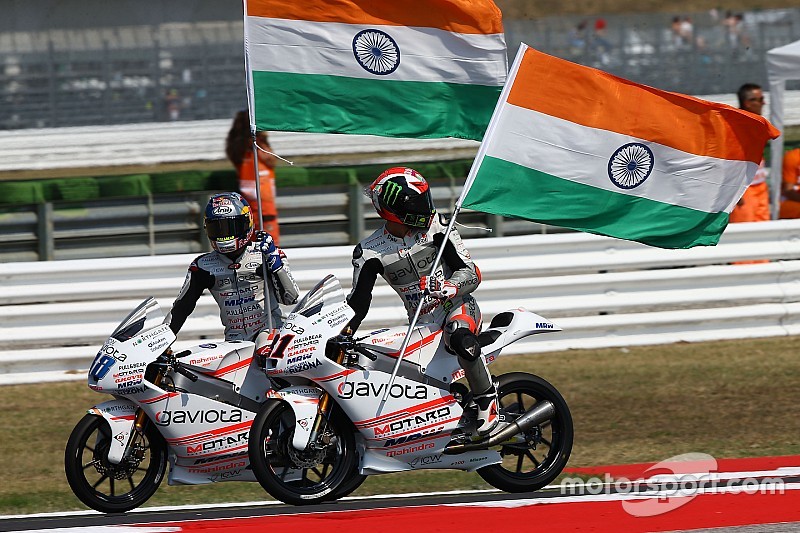 The 2016 Moto3 season was a landmark one for Mahindra, as it became only the third manufacturer, after KTM and Honda, to register a win in the category since its inception in 2012.

The Indian marque took its first win at the hands of Francesco Bagnaia in the Assen race in 2016, with the Italian rider then adding a second win later in the year in dramatic fashion at Sepang.

Not only did Mahindra win races, its sister brand Peugeot, running as a manufacturer entry using the MGP3O bikes, also took a victory at Brno, courtesy of John McPhee.

Mahindra also clinched five podium finishes, divided among Bagnaia and Jorge Martin, to score 211 points, by far its best haul in Moto3, with Peugeot scoring another 55.

Four years after Mahindra made its lightweight class debut, it became a fully-fledged manufacturer in 2015 in partnership with the Aspar team, and last year it took the next step needed to challenge the established KTM and Honda teams.

With the aim of winning the riders' title, as well as the manufacturers', Mahindra's Head of Design and Development, Davide Borghesi, looked back at the successful 2016 season and talked of the plans ahead in 2017 in an exclusive chat with Motorsport.com.

Q) So Davide, how would you sum-up the record breaking 2016 season with multiple wins and podiums for Mahindra?

"It has been wonderful. That is the short answer! The longer answer is that it is a very rewarding feeling, everyone involved in the project has put in huge amounts of effort and work to get to this point.

There have been some hard times over the years when we weren’t getting the results we knew we could, but everyone involved knew what we were capable of. Perhaps the most remarkable part of this year’s story from a technical side is that we took it all in-house to Besozzo.

We still have some technical partners, but this year we are more independent than ever with our development and to achieve these results is simply great."

Q) The MGP3O was a brand new bike revealed at the start of 2016, can you reflect on the key changes made on this bike from its predecessors?

"We have been improving every area step by step and 2016 was really a big step for us. The chassis was always very strong, the best on the grid, and now we have gotten even better with this.

The engine too has been an evolution at the start of each year. In 2016, we started in not the best way with the gearbox, but with was a bit of a tactical choice.

We knew that with the rules we could have an update during the season for the gearbox and we chose to take advantage of this. I would say it has worked! With each bike we make we learn something, there’s always gains over the last year."

Q) Looking at the factory side where the race-winning bike was produced, how many people work on there? And how many bikes they work upon?

"The development centre in Besozzo, Italy has a team of under 30 people, so we all have to work very well in order to get everything done.

Beyond this we are still working on deals with other teams in the Junior World Championship, but in total there will be ten factory-supported bikes across the three biggest championship for now."

Q) What were the developments made all through the 2016 season?

"Even though the MGP3O was developed at our Italian base, we still have some support from various partners all over the world. We work with Ohlins, Arrow Exhaust, Nova Racing and many more, spread out all over the world in Switzerland, Sweden, the United Kingdom and Italy.

As for upgrades and updates during 2016, most have come to the gear shifter and gearbox. We brought it all in for the German GP and saw better results straight away.

In the world championship you can only have a small number of updates during the year so you must be certain they will help."

Q) Now that Mahindra has a race winner, where do you think the team lacks in terms of a Honda or a KTM? Where do you think, you need to work the most to make it constructor winning bike now?

"In terms of the bike, there is not much difference between the MGP3O and the KTM and the Honda. We have proven on many occasions that we can fight with these guys.

Maybe a little more performance in the low-end of the engine would help us, but otherwise I don’t see why we can’t fight always at the front with the right rider."

Q) For 2017, the team has decided to go for less number of bikes to customer teams, do you think this will allow you to catch up with your immediate rivals?

"It should help us. This move will certainly allow us to have more MGP3Os fighting for the front. In 2016 it was often only the Aspar team who could regularly fight for points, but now we are confident that we will have more bikes in points."

Q) Talking more on 2017, how is the preparations going on? Are we to expect something new from Mahindra? What will be the next target for the manufacturer?

"We are still hard at work. Most parts and ideas are final, but we learn every time we go out on track for a test or a practice session. There will be significant upgrades to every area of the bike.

The biggest is a brand new engine, this is the piece we are currently spending a lot of time on. In terms of chassis we are very, very strong and the engine is one of the final pieces we need. Our next target is to win the championship."

Q) Considering Moto3 has been fruitful till now. Will Mahindra think on Moto2 or even MotoGP in the same partner model? And also any plans to set up cross-country rally bikes in the future?

"First we need to win a Moto3 title! We always get asked this question about Moto2 and MotoGP. but honestly we are only thinking about Moto3 right now.

And no, there are no plans either for any cross-country outings at the moment."