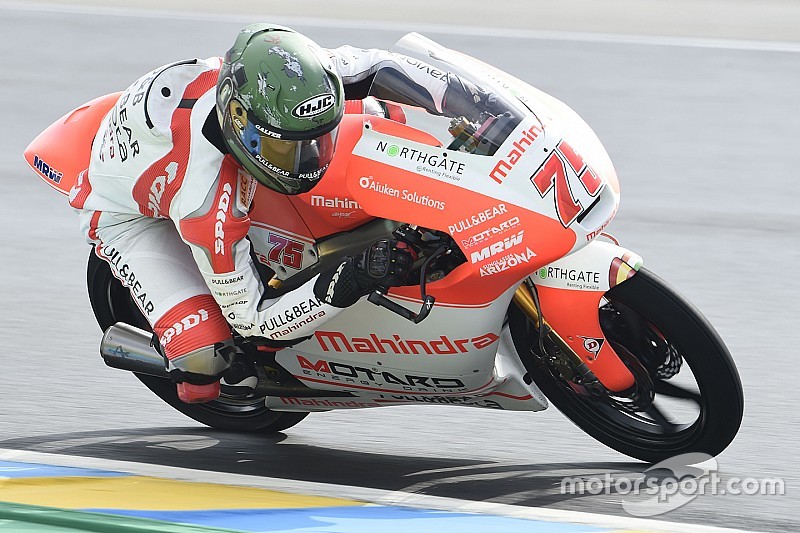 Fresh off his first points finish of the season in Barcelona, Arenas lapped the Bugatti layout of Le Mans in 1m43.038s to book a spot on the third row of the grid.

It was Arenas’ best qualifying result in Moto3 and Mahindra’s best starting position since Francesco Bagnaia lined up third on the grid for last year’s Malaysia round.

"We felt good in the morning, it was a little wetter than yesterday, but I felt confident going into qualifying,” the Spaniard said.

“I felt comfortable with the bike, so it was just a matter of pulling it out and being focused. I was competitive since the beginning of the session.

“In addition, it has given us time to work a little with the race tyre in the middle of the session although we will see tomorrow how the bike behaves because it is a long race."

Arenas, however, feels there’s scope for minor improvements to make MGP30 the “perfect bike” for the French round of Moto3.

“I am happy with my best qualifying and I want to thank the team because the bike was going well. Even so, we will have to work a bit more to have the perfect bike for tomorrow. "

Meanwhile, Lorenzo Dalla Porta was unable to carry forward his practice form into qualifying, having come out on a secluded piece of track where there was no chance of gaining an advantage with a tow from rivals.

The CEV Moto3 Junior Champion, who set the second fastest time in FP3 on Saturday morning, will start the race down in 20th place, leaving him with an uphill task to score points.

"I made the wrong choice of tow in qualifying and that has made tomorrow a difficult race,” he explained. "In the end I found myself alone on the track, and I didn't set a great time.

“We start from the 20th place, but I think there is a lot of room for improvement in terms of position, because Albert Arenas has shown it today.

“We need to do a good warm-up session tomorrow, plus a good start, and then try to overtake the maximum possible number of riders in the race."